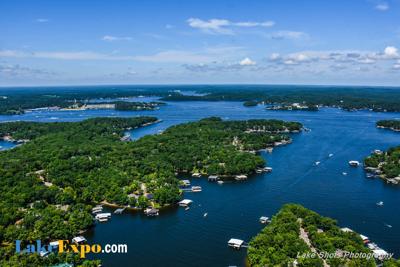 It was a year no one saw coming: Lake of the Ozarks broke through the billion-dollar mark in annual real estate sales volume for the first time ever, in 2020.

“This last year it really seemed like the rest of the world decided they wanted to be at the Lake of the Ozarks. It was just so many people from so many areas,” said Dee Dee Jacobs, of Jacobs Real Estate Partners powered by eXp Reality.

People bought homes hours after they’d been listed and at dollar amounts sometimes nearly twice the asking price. Jonathan “JR” Hartenstein, with Lake Ozark Real Estate by Jonathan Hartenstein, tells of a house he had listed at $269,000. After multiple offers it sold for $387,000, a 43% increase. Real estate agents say houses often sold so quickly that buyers were signing a contract without even seeing the property in-person, so another buyer wouldn't snatch it up first.

“If I’m working with a buyer, one of the very first conversations I have with them is that I don’t even care if you’re in St. Louis, you’re not going to have time to come here and look at something,” said Susan Ebling with RE/MAX Lake of the Ozarks. “If something good comes on the market that’s perfect for you, it’s perfect for a hundred other people, and they’re waiting for it too.”

A Brief Moment Of Worry

But it wasn’t a guarantee that 2020 would be a billion dollar year. When the Covid-19 pandemic first hit, the housing market swirled with uncertainty, and with a presidential election on the horizon there was some concern that 2020 might be another 2008, the year the housing bubble burst. Home sales then were in a veritable free-fall until 2010, when the annual sales volume bottomed out at a mere $327 million.

“Everyone was really kind of scared, because nobody knew what was happening,” said Ebling, recalling the early days of the Covid shutdowns. “So nobody was really doing anything. Phones weren’t ringing. We were all sitting at home like ‘Oh my god what’s going to happen?’”

Then the phones began to ring, and the floodgates were opened: by summer, the Lake's real estate market was on its way for a record-setting year.

Let's Move To The Lake

One major factor that brought this tsunami of homebuyers to Lake of the Ozarks, according to realtors LakeExpo spoke to, was an interest in the freedom the Lake offered from Covid-19-related restrictions. Homebuyers came from Iowa, Nebraska, Ohio and even places as far off as California and New York.

“I’m getting emails from people who not only have never heard of Lake of the Ozarks in their life, they didn’t even know where Missouri was. They were just like ‘You guys look like you’re living pretty normal and free, we’re coming down.’ And they’d buy something!” Ebling said.

The infamous TMZ footage of parties at Backwater Jacks brought the Lake of the Ozarks to the national stage, and generated further interest in moving here.

“I told Scott (Scott Pasmore, a CBS affiliate reporter who posted the video that went viral through TMZ) that I owe him lunch for the rest of his life,” joked Hartenstein.

And people didn't just buy Lake of the Ozarks homes to visit. Many have relocated, making the Lake house their permanent home. With the rise of remote work that allows people do their job from anywhere, the Lake of the Ozarks is a beautiful place to work from, says Jacobs. “A lot of other people thought that now we can work from home, why not go to the place we love? That’s why we’re seeing not only people buying second and third homes but we’re seeing people move here full-time.”

In terms of percentage increase from 2019 to 2020, waterfront lots and million dollar listings did especially well. Total sales for listings over a million dollars jumped 245% compared with 2019, and waterfront homes jumped 229%. Offshore houses had the lowest growth, at a still-whopping 43%.

According to realtors LakeExpo spoke to, most expect 2021 to stay on the upswing for real estate sales. Low inventory is the biggest hurdle facing realtors; after several strong years of sales the sitting inventory of houses for sales has become smaller and smaller. That means homes will likely keep selling quickly, and that puts upward pressure on prices.

“There is a misconception that there is nothing to buy, but homes ARE coming on the market, they just don’t last. It’s true there is no ‘sitting’ inventory, but new inventory comes on all the time, you just have to be able to jump on it when it hits the market,” explained Jason Whittle, broker at Jason Whittle All Pro Team RE/MAX Lake of the Ozarks.

“It doesn’t really surprise me that the Lake of the Ozarks is finally getting discovered,” Hartenstein said. “It’s the center of my universe. I can’t imagine anyone wanting to live anywhere else.”

Missouri Was The 7th Most Popular State For Americans Moving In 2020, U-Haul Data Shows

Americans are increasingly opting for a Missouri address. The Show-Me State was the seventh-most-popular state for Americans migrating in 2020…