LAKE OF THE OZARKS, Mo. — If you violate Missouri's "Stay Home" Order, you could be charged with a Class A Misdemeanor, punishable by 1 year in prison, a $1,000 fine, or both.

That's what the Camden County Commission put into an ordinance on April 7, and while the commission has been catching heat for the ordinance that adopts Missouri Governor Mike Parson's "Stay-Home" Order (with additional county-level restrictions), Presiding Commissioner Greg Hasty points out the county is simply mirroring what already existed in state statute. He's right. Missouri Revised Statutes (RSMo) 192.320 states: Violation of law or quarantine — penalty. — Any person or persons violating any of the provisions of sections 192.010, 192.020 to 192.490, 192.600 to 192.620 or who shall leave any pesthouse, or isolation hospital, or quarantined house or place without the consent of the health officer having jurisdiction, or who evades or breaks quarantine or knowingly conceals a case of contagious, infectious, or communicable disease, or who removes, destroys, obstructs from view, or tears down any quarantine card, cloth or notice posted by the attending physician or by the health officer, or by direction of a proper health officer, shall be deemed guilty of a class A misdemeanor. That statute—192.320—is the "teeth" at the end of a section specifying how the Missouri Department of Health and Senior Services (DHSS) and local health departments and county commissions may enact rules and laws during times of medical emergency.

"The county health department is required to obey this order," Hasty told LakeExpo.com. And he said as commissioners vow to uphold the laws of Missouri, the commission too is obligated to stand behind the governor's order and accompanying penalties for violation. He added, "The local law enforcement really doesn’t have any choice because they are bound to uphold these laws."

However, state law and the recent DHSS order notably do not require local sheriff's offices to enforce such orders; in fact, the DHSS order lays the responsibility on county health departments, and Lake area sheriffs are distancing themselves from enforcement.

Here's a run-down of Missouri statutes that are operating and empowering the DHSS order:

RSMo 536.025 explains that in times of emergency, state agencies may enact rules, but it does specify those rules must "comply with the protections extended by the Missouri and United States Constitutions."

RSMo 192.020 gives DHSS "power and authority, with approval of the director of the department, to make such orders, findings, rules and regulations as will prevent the entrance of infectious, contagious and communicable diseases into the state."

So while the state's chief executive—the governor—announces orders like Missouri's new Stay-Home Order, it's actually the Missouri Department of Health and Senior Services that puts the order in place. Notably, the Stay-Home Order is not among Governor Parson's list of recent Executive Orders, since it is not an Executive Order: it is a DHSS order. The full DHSS order is viewable at the end of this article.

That same dynamic occurs on the local level as well, with different counties exhibiting varying levels of coordination between their health departments and county commissions. In Camden and Morgan counties, the health departments have been issuing orders jointly, whereas in Miller County, the orders are coming solely from the Health Department.

Some in the community and among local law enforcement have expressed concerns, however, that the DHSS and local laws banning or severely restricting gatherings violates the Constitution: specifically the 1st Amendment provision allowing for freedom of assembly, and the 4th Amendment provision prohibiting unreasonable searches of private property. Plenty of ink has been spilled arguing this issue, and while precedents do exist in comparable situations (in the 1905 case Jacobsen v Massachusetts, the U.S. Supreme Court held the city of Cambridge had not violated its citizens' Constitutional rights by requiring them to be vaccinated against smallpox or fined $5), the debate rages on. Regardless, the first test of any law is often in whether it will even be enforced.

Enforcement requires enforcers, and a willingness on the part of those enforcers to be proactive, reactive, or inactive in response to the order could vary widely. The governor's office said it would rely on local communities to enforce the statewide order, and the Missouri State Highway Patrol has echoed that position.

The DHSS order from April 3 states, "Local public health authorities are hereby directed to carry out and enforce the provisions of this Order by any legal means."

So who are the enforcers? Legally speaking, Camden County could appoint a County Health Officer (per RSMo 192.260, mentioned above, this person would have to be a licensed, qualified physician) and deputies for enforcement. But it's not clear the commission has interest in doing so, which leaves enforcement up to health departments and what appear to be reluctant or downright defiant local sheriffs. While local sheriff's offices have broadcast clearly that they are concerned about COVID-19 and are strongly urging citizens to treat it as a very real threat, they have also distanced themselves from the idea of enforcement.

At Lake of the Ozarks, Camden County Sheriff Tony Helms said in an open letter to Camden County citizens on April 8, "At this time, my office will not be actively enforcing this order."

He explained, "My deputies will not be stopping cars, going into people’s homes or anything that infringes on your rights, to enforce this order. I am trying to tread lightly to ensure everyone’s individual rights remain intact."

"You don’t see any large-scale proactive enforcement of these mandates by my office," he pointed out. "These guidelines address public gatherings where large amounts of people congregate, not your immediate family household."

Helms also pointed out most states are relying on the "good will" of citizens to obey their Stay-Home orders, and said his office will be doing the same.

In Morgan County, Sheriff Norman Dills distanced his office from enforcement of the state order. In a Facebook post dated April 5, he wrote:

Deputies will not be stopping cars to ask the driver where they are going. Not only is this not part of the Governor’s Order, it would be unconstitutional for us to act in this manner. If a driver is stopped for some reason such as a traffic violation, they do not have to show some written documentation of where they are headed, i.e. a “workplace travel permit” there are no such permits!!

It’s also important for citizens to have factual information as to the handling of formal complaints as to the Governor’s Order. The Order specifically outlines violations are to be handled by local and state health (civil) authorities. Thus for, any formal complaints outside of the municipalities will be handled by the Morgan County Health Department under the regulations, rules, and laws for which state statute allows for public health related investigations, enforcement, and civil Court sanctions. Inquiries as to this process should be directed to the Morgan County Health Department Inquiries as to additional restrictions, etc. inside the cities of Versailles, Laurie and Stover as put forth by city ordinance should be directed to city authorities. Sheriff’s Office operations remain unchanged come tomorrow morning.

The Miller County Sheriff's Office could not be reached for a response.

In nearby Benton County, which sits on Truman Lake and the westernmost edge of Lake of the Ozarks, their Sheriff's Office has publicly pushed back against what Sheriff Eric Knox worries is a violation of citizens' constitutionally guaranteed rights.

Knox told LakeExpo.com, "It's very clear that it's on the department of health to enforce their own orders," adding, "Everything they do is civil action." It would take quite a few steps for sheriff's offices to become involved, he said: the health department could pull the food or liquor license of a restaurant or bar that refused to close under recent orders. If that establishment still refused to close, the health department would have to go to a judge for a cease-and-desist order, and then if the business owner still refuse to close, it could become a law enforcement matter. Knox noted city police enforcing city Stay-Home orders are a different matter: city police and sheriff's offices are not the same, in terms of their responsibilities, he emphasized. "The sheriff is the person between government overreach and citizens," he said.

Knox wrote in a Facebook post dated March 20, "As your Sheriff, I will not support any infringements upon your Constitutional Rights!" He also stated, "I, as your Sheriff am telling you that unless President Trump enacts Martial Law, your Constitutional Rights are intact. You are free to move about, congregate as you see fit (To clarify... the COVID 19 Virus is real. It's scary because of the health risk and the unknown. If you gather, use caution and common sense.) and live free as the power of our great Constitution permits." He was widely praised and criticized for the post, which had nearly 800 comments and 548 shares as of April 8. Read the full post here.

A few days later he penned another post, urging people to be cautious, practice social distancing, and wash their hands. But he also said, "In addition to upholding the law, the sheriff of each county is also charged with upholding the supreme law, the Constitution. I will educate, suggest, urge and plead if necessary, for our citizens to follow the CDC guidelines, but I am also responsible for safeguarding your freedoms as American citizens. I pray that people will do the right thing because it is the right thing to do. Your health, your safety and your freedoms promised to you by the Constitution are my top priority." 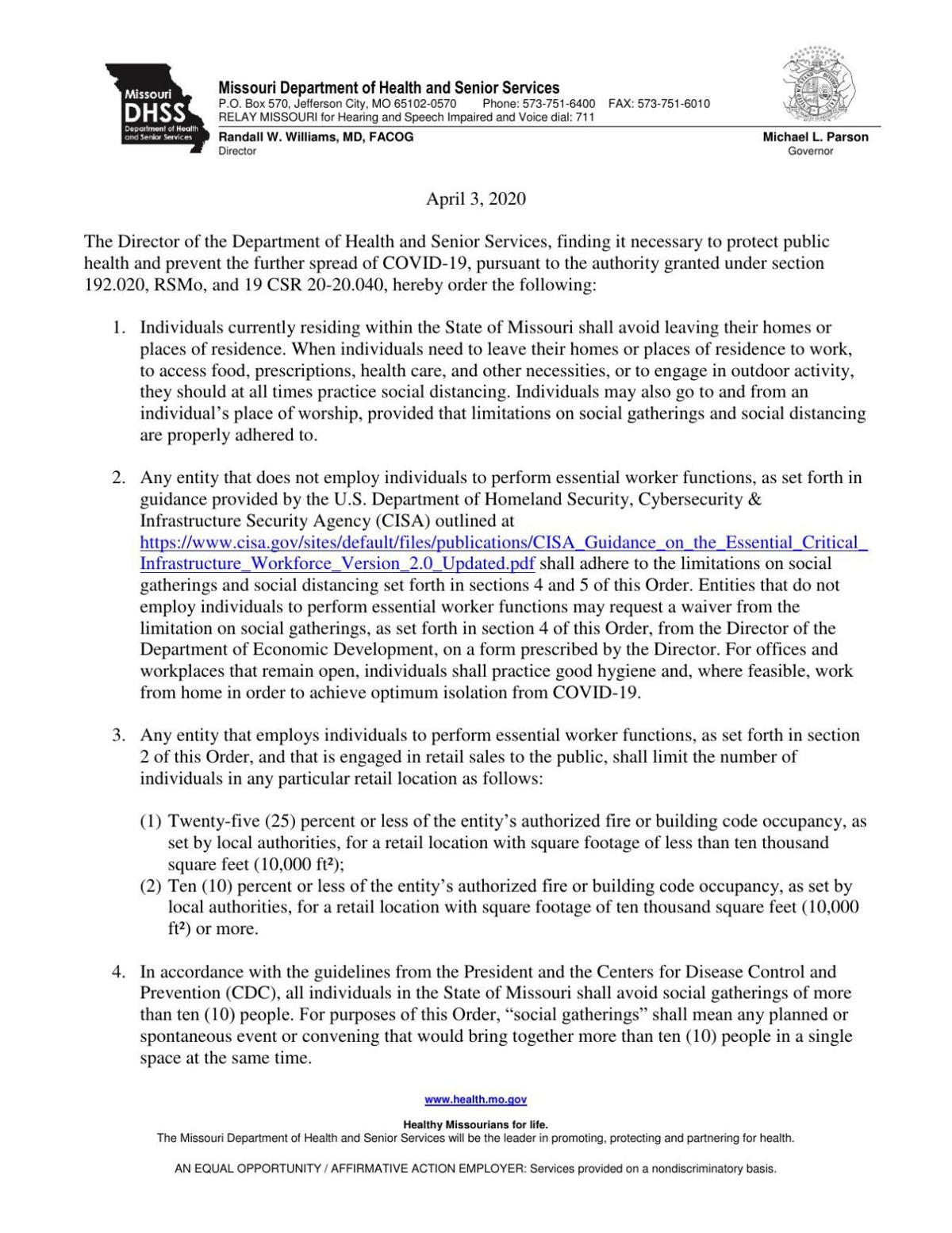