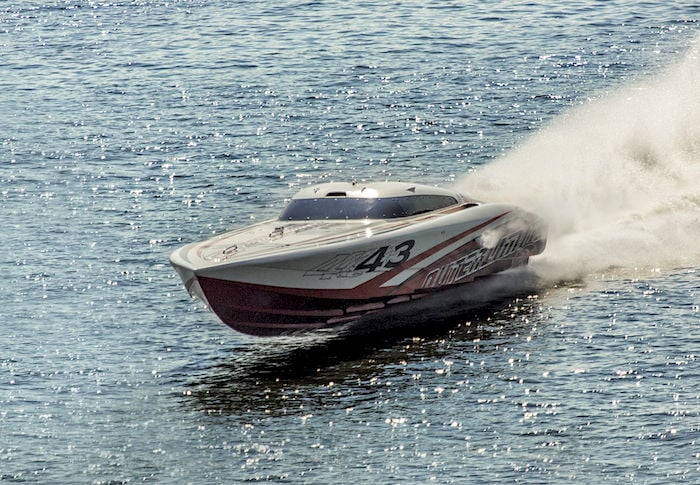 Driving an Outerlimits boat is like driving a brand new Lamborghini. 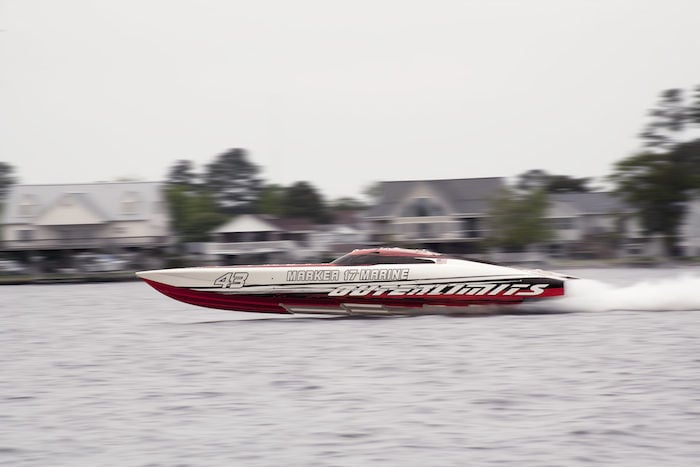 The original version of this article incorrectly stated that My Way was an Outerlimits boat. The current version has been corrected, and LakeExpo.com apologizes for the error.

Racing fans look forward to seeing the wide range of boats roaring down the course at the Lake of the Ozarks 2014 Shootout. Among the many boats on the course, racers will have the chance to see Outerlimits boats race down the Lake for the 2014 Shootout.

Outerlimits builds sleek, luxurious, high-performance powerboats. These high-quality watercraft are expertly crafted and customized to buyers’ specifications. The company’s obsessive attention to detail in the design process makes driving an Outerlimits boat like driving a brand new Lamborghini. Along with their good looks, Outerlimits boats offer impeccable performance. Light carbon fiber creates a flawless and fast piece of art. The company’s slogan perhaps says it all: “Comfort, safety, and elegance meet performance with no compromise.”

Owner and founder of Outerlimits Powerboats, Mike Fiore, is also a proud racer in the Shootout, driving and throttling his own personal Outerlimits boat. This year he's bringing the boat that won the 2008 World Championship in Key West, and the United States National Championship in Clearwater, Fla.: Snowy Mountain Brewery. Mike Fiore and his throttleman, Matthew Janssen, also known as the “Cutting Edge Team,” plan to push this 30-foot Outerlimits powerboat to the limit at this year’s Shootout. Their gameplan? “We are going to try and keep the record by being consistent.”

Outerlimits At The Lake

Originally, the company was named Performance Boat Brokerage. Brett Manire had worked there for a year and a half when he decided it was time for a change. He joined forces with long-time friend and customer Mark Waddington, and together they bought the brokerage company and began the re-formation and evolution of what has become the premier, comprehensive boating center on the Lake of the Ozarks: Performance Boat Center.

Manire says the company began selling Outerlimits boats in 2012, and he chose the brand because of its technology, speed, and handling. “They’re ahead of their times, as far as design,” he said.

Performance Boat Center’s newest development, however, is a unique, luxurious club where boaters can refuel, unwind, and even do a little shopping: Redhead Yacht Club. Located on the 21 Mile Marker of the Lake of the Ozarks, Redhead Yacht Club offers more than 100 boat slips, boat sales, indoor and outdoor storage, and a fuel dock. Coming soon, alongside Redhead Yacht Club will be Bikinis Pool Bar — one of the largest of its kind on the Lake. The full-service bar will offer a perfect place to relax, have a drink, and cool off on a hot, summer day.

Srgo is a 15-time world and national champion, and an eight-time kilo record holder.

Srgo and Brian Forehand of Marker 17 Marine went on to break the world V-bottom kilo speed record on April 29, 2014, in an SV 43-ft. Outerlimits. Forehand drove and throttled in that run, with Srgo riding in the cockpit.

Reggie Fountain and Ben Robertson held the former Vee bottom kilo record of 171.88 mph set in 2004 on the same course—near the old Fountain factory on the Pamlico River in Washington, NC. They established that record in a 42-ft. Fountain.

The day before, the team averaged 172.876, and were forced to quit early after debris from a tornado that ravaged the area on April 25 broke two props and a skeg.

After the 180-mph record-breaker the next day, Outerlimits team member Brian Forehand also set a new American Powerboat Association SV single kilo speed record of 100.840 on the same course. Forehand drove and throttled the 30-ft. Outerlimits powerboat Snowy Mountain Brewery. That boat is owned by Michael “Doc” Janssen and is powered by a single 525 EFI Sterndrive.

Speaking about Outerlimits Powerboats, Srgo said, “I believe in the product and the safety and the fact that what they do as a boat company is not economically driven. They are pioneers and they are an innovative company that understands how to make a product better.”

2014 Lake of the Ozarks Shootout Guide

LAKE OF THE OZARKS, Mo. — Less than an hour after racing began, tragedy struck the 2014 Shootout when a Outerlimits catamaran driven by Joel B…