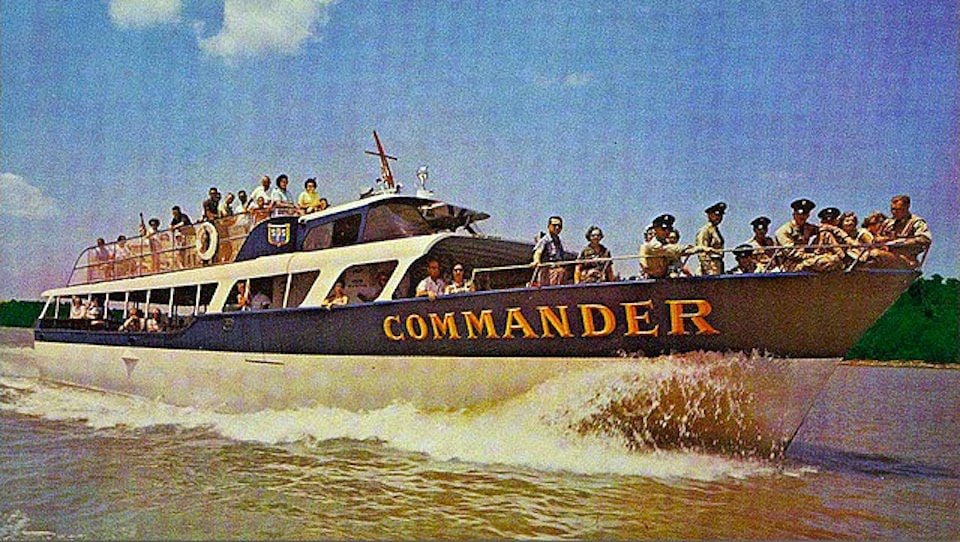 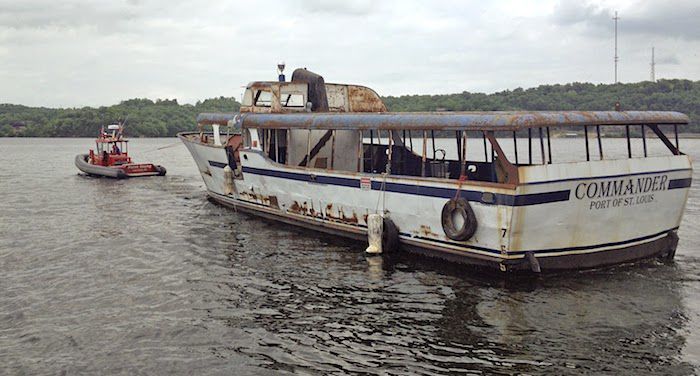 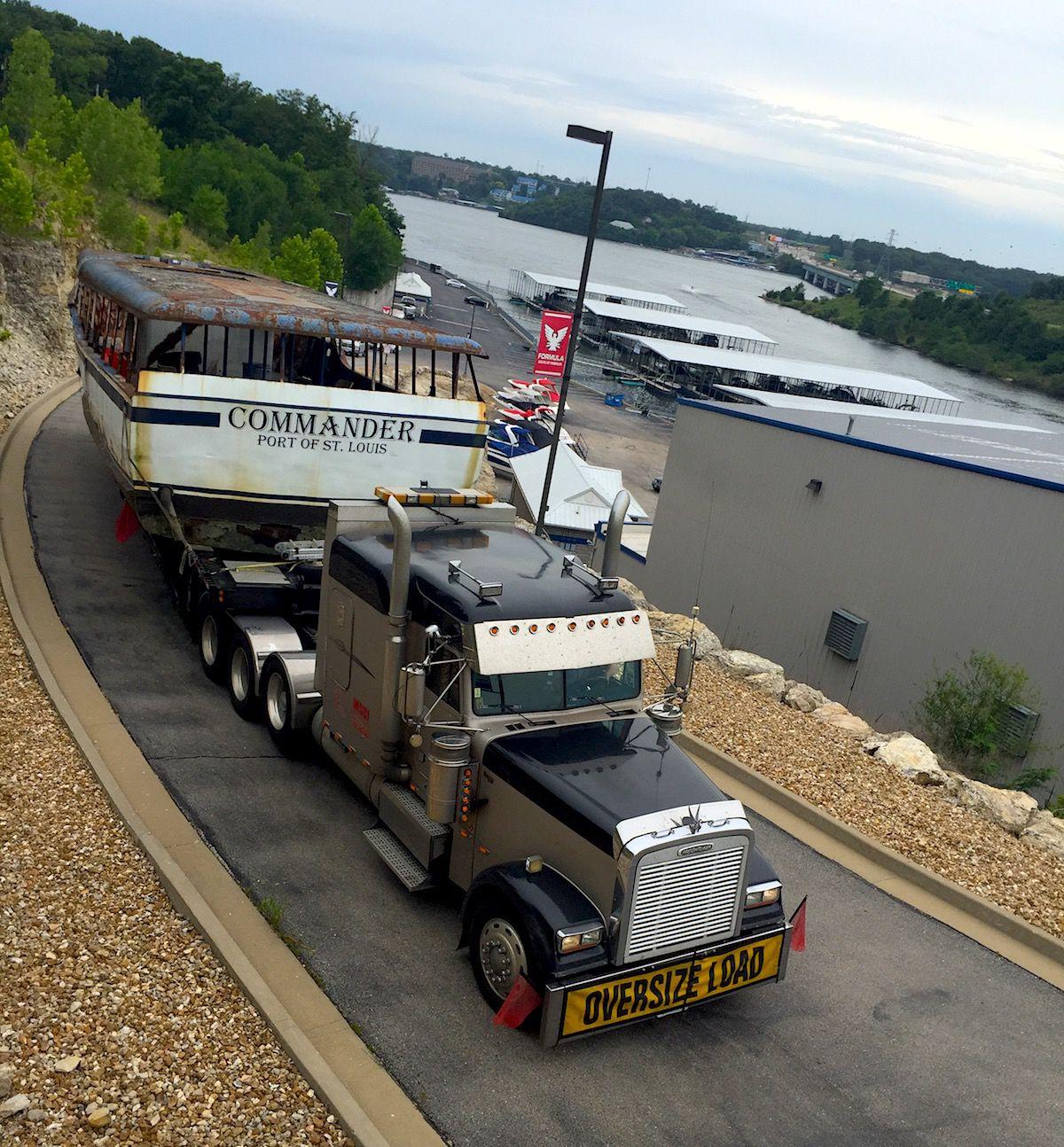 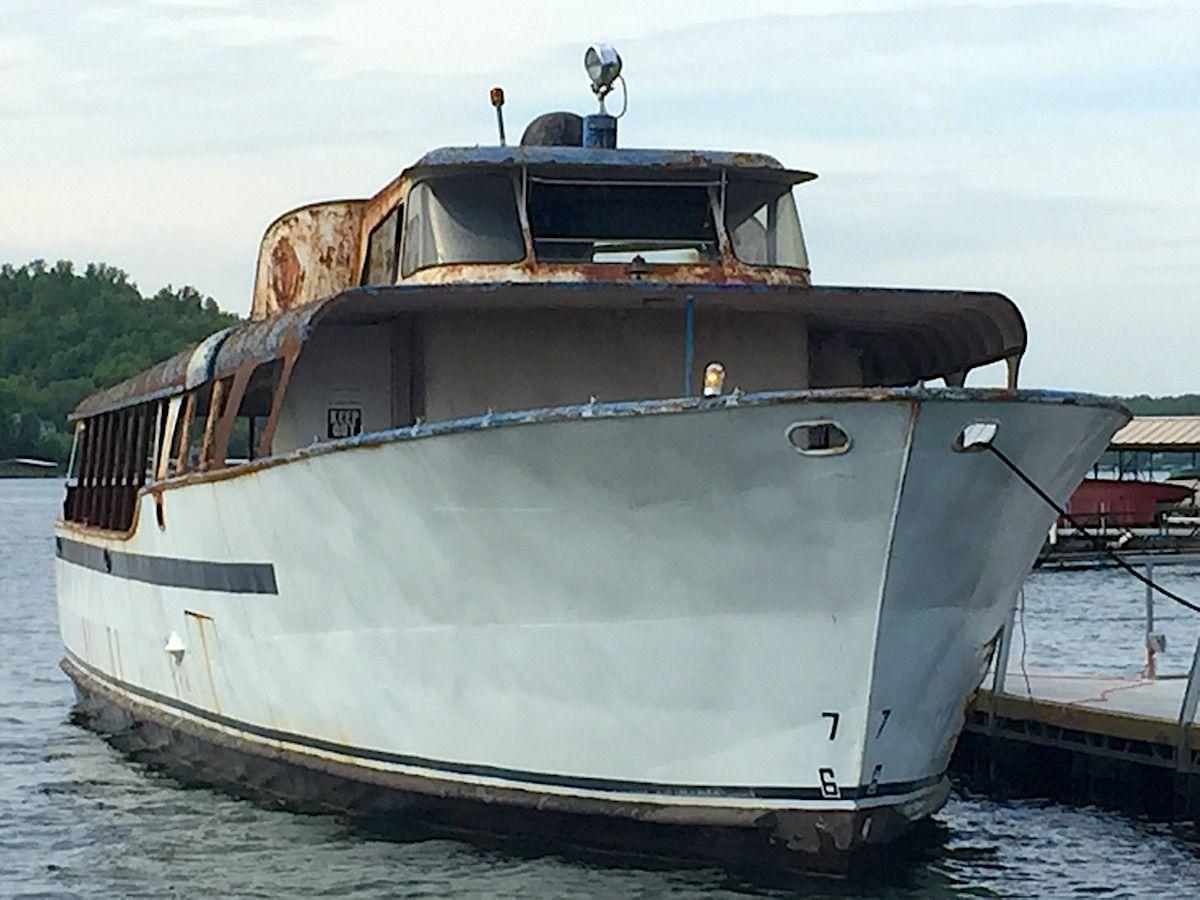 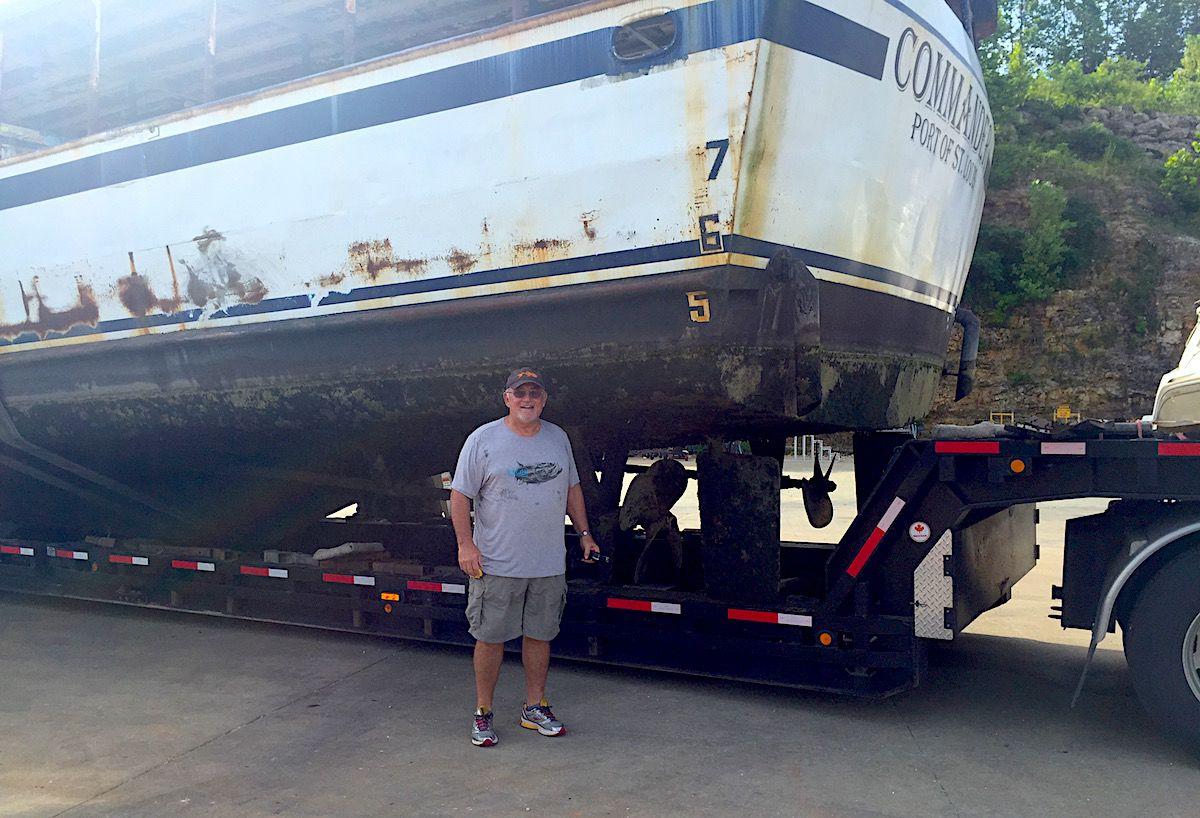 UPDATE: The Commander is no longer for sale, but we've left this article with the headline and content unchanged, for our archives.

She measures 68.5 feet long and 16.5 feet wide, and if a boat could talk, The Commander could tell some stories.

One of the Lake of the Ozarks’ original party boats, The Commander cruised the Lake starting in 1962, outfitted for well over 100 people, with two restrooms. Folks out for a day cruise on the Lake did it in style and luxury!

But in recent years, The Commander has sat near Beavers At The Dam and the old Casino Pier, as the Lake buzzed busily and Bagnell Dam turbines churned nearby. But where visitors saw an empty hull and longtimers saw a piece of nostalgia, Lake of the Ozarks powerboating enthusiasts Larry and Brenda Chamberlain saw potential.

The Chamberlains bought The Commander in May of 2015, after plotting a course to restore it and return it to the water as a tour/party boat once again. “We admired its shape,” he recalls. “It had such a pleasing aesthetic.” The diesel engines still ran beautifully, and he piloted the boat to a cove at the 6 Mile Marker, searching for a place to pull the giant vessel out of the water. Neighbors’ jaws dropped.

“What are you going to do with that?” they asked. The Chamberlains planned to have the boat back on the water within a year.

They pulled the boat out at Formula Boats, near the Grand Glaize Bridge: one of the few ramps suited for such an endeavor. Larry says he still can’t figure how The Commander got to the Lake in the first place, and no one has been able to tell him. The boat was built in East Dubuque, Ill., by Dubuque Iron Works, on the Mississippi River. Maybe it chugged down the Mississippi, took a right in St. Louis, went up the Missouri River to Jefferson City, and was pulled out there? Or perhaps it came up the Osage River to Tuscumbia or Bagnell?

Regardless of the boat’s maiden voyage, Larry says hauling her on land was a harrowing experience. The upper deck had to be cut off because the boat is so tall (that deck alone would hold 100 people in its heydey, he says). Then it was slowly towed east on Highway 54, to the Highway 42 exit, and then—unbelievably—brought down the winding Highway D to Central Power & Rigging, in Kaiser.

For getting the boat commercially seaworthy, the first task was to straighten out the lien situation. It took six months to track down the nearly-impossible-to-find lien-holder, who now lives on the east coast and—once found—was willing to give the boat legal clearance. Then came the sandblasting and structural examination… and that’s where Larry’s plans were sunk.

The U.S. Coast Guard’s standards for commercial vessels’ hulls are much more rigorous than the standards for personal use. Ultrasound tests revealed that, while the hull could reasonably be patched and repaired in weakened areas for personal use, if they ever wanted to operate the boat commercially, they’d have to re-hull the entire thing. The Chamberlains’ grand plans of running a tour/party service aboard a nostalgic vessel on the best recreational lake in the nation were crushed.

The boat is still sitting at Central Power & Rigging, on blocks, and now Larry says he’s ready to sell it. He points out the Commander’s sister ship—built around the same time by the same company—still operates on the Chicago River as a giant water taxi. So will The Commander sail again? With some repairs and upgrades, Larry points out it would make a one-of-a-kind boat for private parties… or it could be transformed into a huge houseboat. Alternately, it could be set on land, where the hull problems are immaterial: there it could be built into a unique restaurant or bar, a museum, or even a house, Larry speculates. “The only limit is your imagination,” he says.

If the boat doesn’t sell, Larry says they have no choice but to cut it up and sell it for scrap: the same fate suffered by the Captain Larry Don—another iconic Lake of the Ozarks party boat whose hull problems sank it just a stone’s throw from where The Commander sat.

LAKE OF THE OZARKS, Mo. — All hands were on deck to keep one of the Lake’s most famous party…

The Chamberlains welcome serious inquiries about the iconic boat: they hope where their dreams for The Commander ran aground, someone else’s vision might be launched.

The Oldest Boat On Lake Of The Ozarks Sinks

A barge that was used to build the Bagnell Dam has given up the ghost, after nearly 90 years…

LAKE OF THE OZARKS, Mo. — Despite swirling rumors, no definitive plan has been finalized for…

In 1954, A Sudden Storm Capsized An Excursion Boat On Lake Of The Ozarks, Killing At Least Six

59-Foot Predator Yacht Arrives At Lake Of The Ozarks

A 59-foot yacht slipped into the Lake of the Ozarks this week.

When new, the Commander was brought up the Osage River to a ramp just below the dam. A large truck and two cranes lifted the boat out of the water and the boat
was then hauled a short distance to the lake--not sure where, possibly the old Lake Park boat yard. I know because my father took me to see the it happen. When the Commander first started operating on the lake it shoved a huge wake which damaged docks. After many complaints, they slowed the boat down a bit to create a smaller bow wave (displacement hull). I once met one of her captains. He said they cheated on length registration to avoid USGG regulations. Whether true or not the boat appeared longer than 65 (or even 68 feet). I also remember seeing the old wood, Osage Chief before being retired. Also, the Governor excursion boat sank after it unloaded guests, I think that happened the very late 60's.

Oops. The boat built up Indian Creek may have been the Tom Sawyer.

I remember seeing the Commander being built, out of the water, on the north shore of the Gravois arm, possibly up Indian Creek, when I was a teenager. I was born in 1948. The boat was up on the bank, parallel to the shoreline, and I remember thinking it odd that there were no buildings around that looked like they would be support for building a boat that big. Maybe parts of it were built in Dubuque and shipped to the lake and assembled there on the north shore. The last time I saw the Commander was the summer of 2015, ironically, near the mouth of Indian Creek. I snapped a picture with my phone. It was rust ridden and beat up like in other recent pictures. Sad.