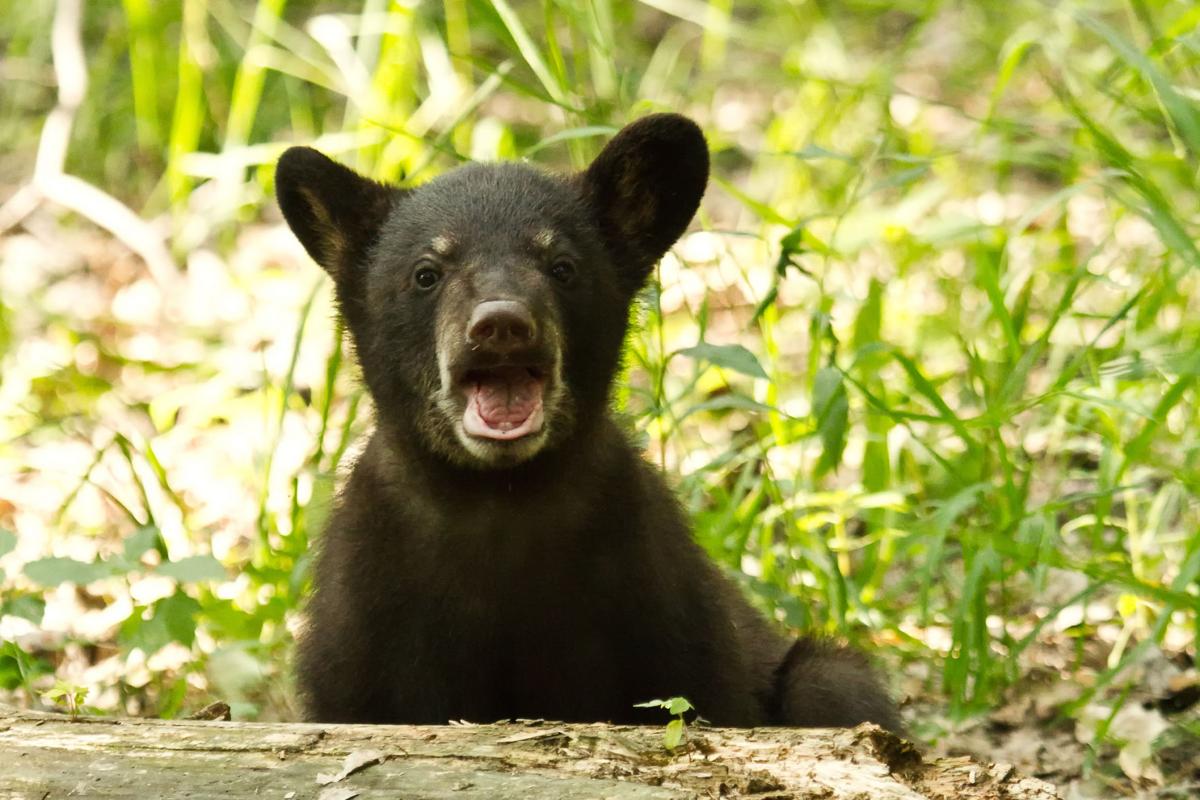 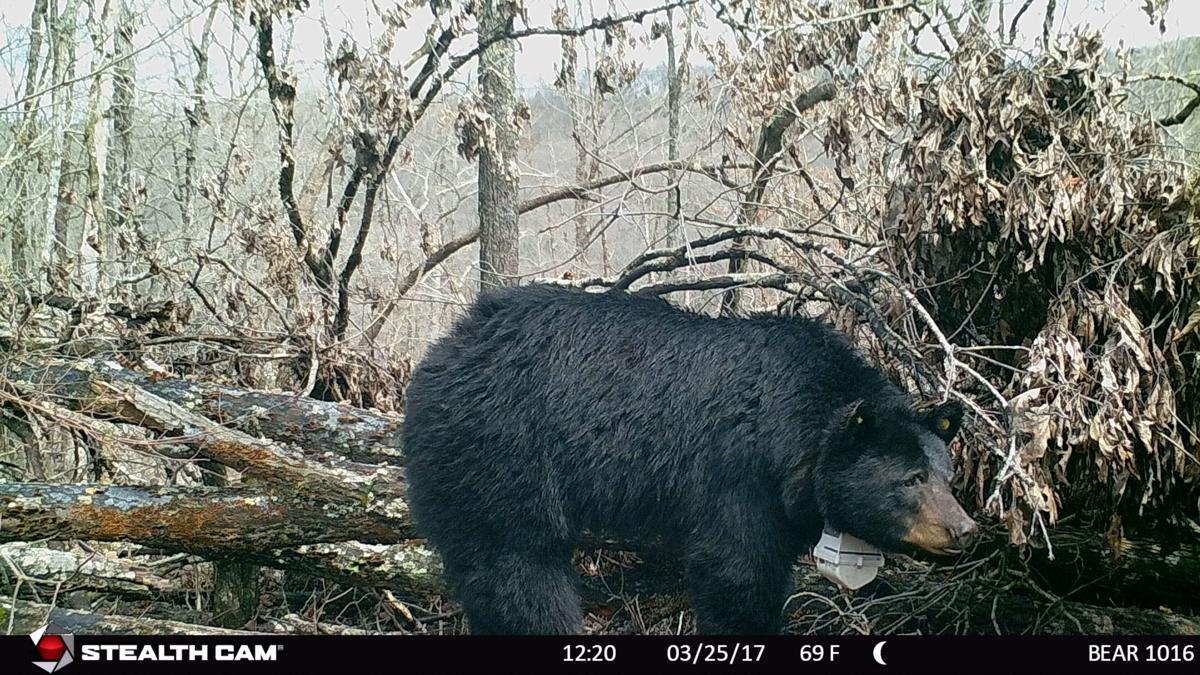 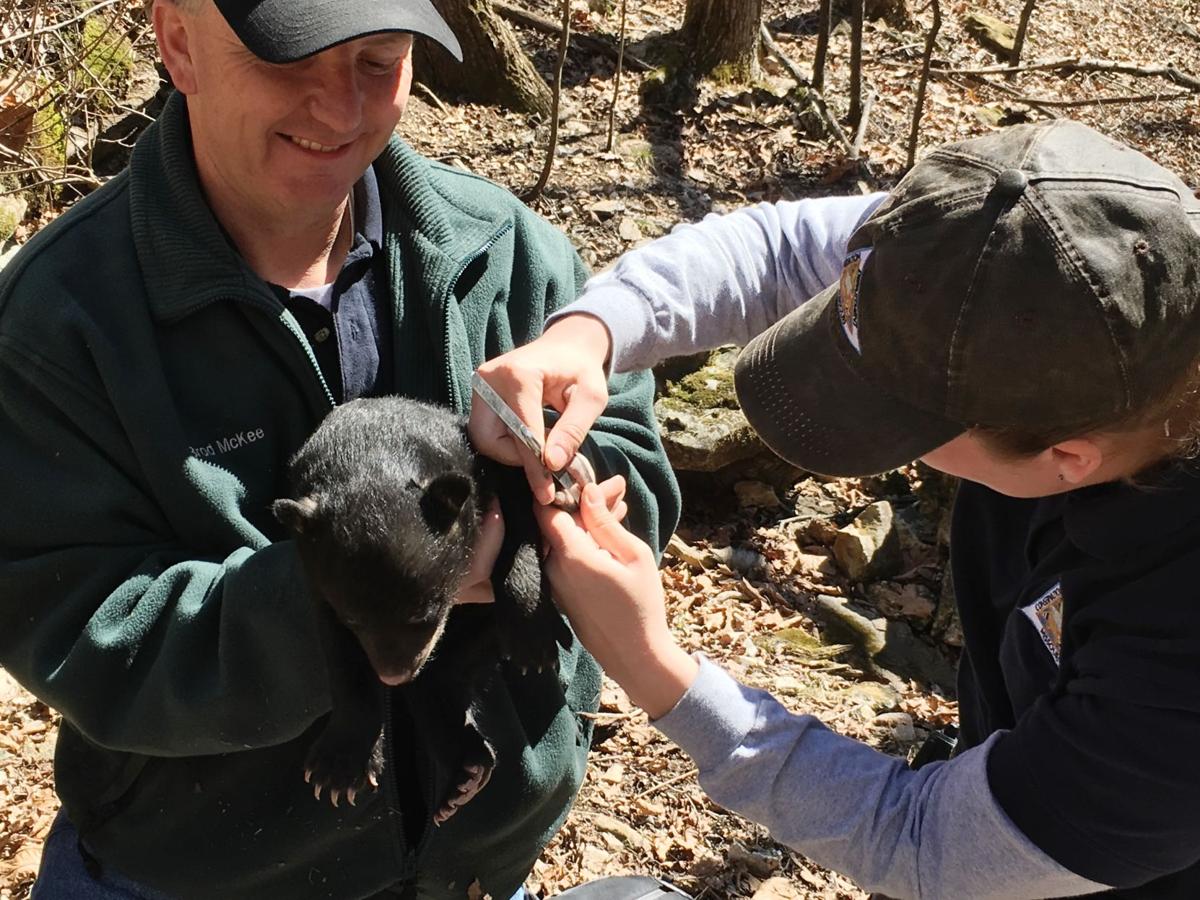 A soundtrack of serenading spring peepers and endless stretches of mud signal to Ozarkians the slow awakening of spring has sprung. While we blink back the bright, warm sun, black bear mamas around the state prepare to emerge from their dens with cubs. But one female black bear that made Lake of the Ozarks headlines in 2017 will be cub-less this year.

Bear 1713 gained fame in the Lake area after exploring a Camdenton neighborhood for several days and entertaining neighbors. She is one of several dozen black bears that have been spotted on the outskirts of Missouri’s established black bear range. Researchers are specifically focused on female reproduction and cub survival rates as the bear population grows in Missouri. Bear biologists were eager to learn if our Lake of the Ozarks gal would be caring for cubs in her winter den. Her den was located, but Bear 1713 did not have any cubs, and she was out foraging.

It’s unknown why bear 1713 did not reproduce this year, but one possible reason is that she was not able to find a mate during the summer breeding season. Since she lives in a less dense bear population than her more southern counterparts, it may be more difficult for her to find a suitable partner.

Black bears also have a unique reproductive technique that can prevent an embryo from forming under certain conditions. They mate in the summer and cubs are born around January or February, but their gestation is only a few months long. If you’re doing the math and it’s not adding up, that’s because bears have the amazing ability to delay implantation of the egg until summer is over and the body knows whether she is healthy enough to carry a cub through winter.

If you’re not a biology geek, you'll want to skip this paragraph. For the nerds like me, I’ll break down the mechanics of delayed implantation, also called embryonic diapause. After breeding in the summer any fertilized egg, called a blastocyst, will begin cell division and then press the PAWS button (sorry, that one was too easy). Cell division temporarily halts while the blastocyst floats, unattached, in the bear’s uterus. After a full season of foraging and eating has taken place, the bear's body determines whether the female has enough body mass to live off of while hibernating, keeping in mind that she will need to keep her own body going, and grow and nurse the cub all without access to food in her den until spring comes. Implantation of the egg and cell division will resume under ideal conditions around November, with the cub(s) born around January. Mom then nurses cubs from within the den until spring when the whole family emerges.

Female Black Bear Being Tracked At The Lake: Conservationists Ask For Public’s Help

LAKE OF THE OZARKS, Mo. — A female black bear sporting an awfully trendy tracking collar has…

Why Wasn't She In Her Den?

Bear hibernation isn't technically a true hibernation; instead, their metabolism is cut in half when food resources and temperatures are low. They can “sleep” for months without eating, drinking, defecating or urinating. This incredible environmental adaptation helps them survive the worst time of the year. They will also enter into a phase of "walking hibernation" when weather conditions do not warrant a full hibernation, which is what researchers think 1713 was doing.

Most of us think that bears den in caves, because... well, that's where most bears live in cartoons and video games. But in Missouri, bears actually have a number of options beyond caves. Bears, including 1713, often make a den from a blown-over tree root structure, by piling leaves and mud around it.

Is the Lake of the Ozarks Really Bear Country?

The most recent population census in 2012 estimated about 350 bears in the state of Missouri, however, according to the MDC, 75 percent of black bears in the state are spotted south of Interstate 44. The Lake of the Ozarks is located north of their main stomping grounds for now, but as the population grows, breeding males and young cubs being cut loose by mom will travel long distances to find new territory. Increasingly their territory is expanding into the Lake of the Ozarks area.

Black bears can reach nearly 900 pounds and are absolutely wild animals. While they are not typically aggressive, maintaining your distance protects both you and the bear. Unlike grizzly bears, black bears are not known to be aggressive, even with cubs around. However, black bears can become a safety risk when they associate humans with food. The most common problem is homeowners accidentally feeding black bears through BBQs, bird feeders, garbage cans or pet food left outside.

1. Think of a bear like a big raccoon: if a raccoon would eat it, then bear will eat it too.
2. Enjoy from a distance.
3. If you encounter a bear, raise your arms and back out of the area. Do not turn your back.
4. If you see a bear in your yard eating something, make sure you remove the food source once they leave.
5. NO selfies with bears!

Here's more information on the MDC Bear Reseach Project and being "Bear Aware" in Missouri.

Sara Halverson is a trained marine biologist, who spent time studying polar bears in Canada and working with them at the Como Park Zoo in St. Paul, Mn. Now she's the Marketing Coordinator & Special Projects Manager for LakeExpo.com... but she jumps at every opportunity to write about Missouri's amazing black bears!