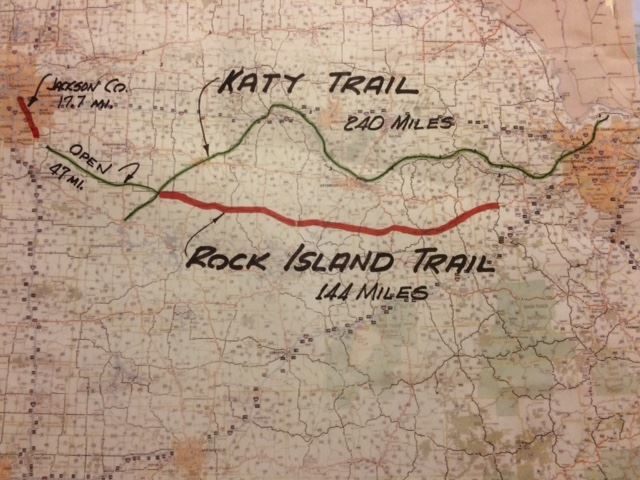 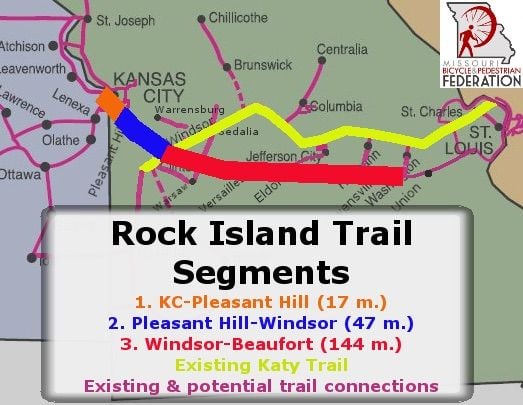 JEFFERSON CITY, Mo. — The Rock Island Trail, a planned 144-mile hiking/biking trail through the heart of Missouri, will be a massive project to complete, but just took one important step forward.

The planned project would begin in Kansas City and end in Beaufort, Mo., connecting with the Katy Trail in Windsor, Mo. and also crossing through the northern edge of the Lake of the Ozarks area, in Eldon. It would do so by converting a stretch of the former Rock Island rail line into a hiking and biking trail, and some work has already been done: land has been cleared and old infrastructure removed. But the big news this week is of an agreement signed between the Missouri Department of Natural Resources (DNR), which would ultimately own the trail, and Missouri Central Railroad Company, a wholly owned subsidiary of Ameren Missouri. The Interim Trail Use Agreement paves the way for the future railbanking of 144 miles of the former Chicago, Rock Island and Pacific Railroad corridor, which stretches from Windsor to Beaufort, Missouri. According to an announcement by DNR, the Interim Trail Use Agreement ensures the preservation of the former railroad corridor for future transportation use and facilitates the eventual donation of the property to the department for recreational trail use.

“Successfully negotiating an Interim Trail Use Agreement was a crucial first objective in this process, and I’m glad we finally reached it,” said Dru Buntin, deputy director of the Department of Natural Resources. “It’s important to remember that this was just the first step on what promises to be a long journey. We can all envision a world-class trail while acknowledging there will be some challenges between here and there.”

“Today’s trail agreement marks a significant milestone in Ameren Missouri’s efforts to donate the remaining 144 miles of the scenic Rock Island Corridor to the state for possible use as a recreational trail,” said Mark Birk, senior vice president of customer and power operations for Ameren Missouri. “Over the last several years, we have been preparing the land for future use by clearing vegetation and removing steel and railroad ties. We will continue to work toward the vision of this trail one day becoming a world-class biking destination that will benefit the communities along the trail.”

However, signing the agreement does not mean a fully developed trail is certain.

The agreement requires approximately $9.8 million be raised before the property will be transferred to the department to help cover initial development, security and management costs. For now, the corridor remains Missouri Central Railroad’s property and is not open for public use.

An estimated total of $65 million to $85 million will ultimately be needed to fully develop the trail. Leading the fundraising effort will be the Missouri State Parks Foundation, a nonprofit organization established to support Missouri’s state park system. Organizers say the project’s funding will likely require a combination of private, public and corporate sources. Interested donors should contact the Missouri State Parks Foundation to learn more about partnering in this effort.

“We are looking forward to working closely with the Missouri State Parks Foundation on this project,” said Mike Sutherland, interim division director of Missouri State Parks. “The scope of this project is massive, but the foundation is uniquely positioned to bring together a wide array of supporters into a diverse partnership that is unified behind a single goal.”

If adequate funding can be raised, the proposed trail will have to be developed in sections, each of which will present its own construction challenges.

More information about the Rock Island Line Corridor is available at mostateparks.com.

The 144-mile Rock Island Trail would connect with the Katy Trail to make the longest trail in the Midwest.

Between $65M–85M will ultimately be needed to fully develop the trail.

A new agreement with DNR allows the former rail line to be set aside and preserved for trail use as fundraising continues.

The future trail, for now, is closed to the public.

A Network Of Hiking & Biking Trails At Lake Of The Ozarks? Local Group Is Exploring The Idea

LAKE OF THE OZARKS, Mo. — A network of trails, with paved and natural-surfaces, could soon wind their way through the hills at Lake of the Oza…