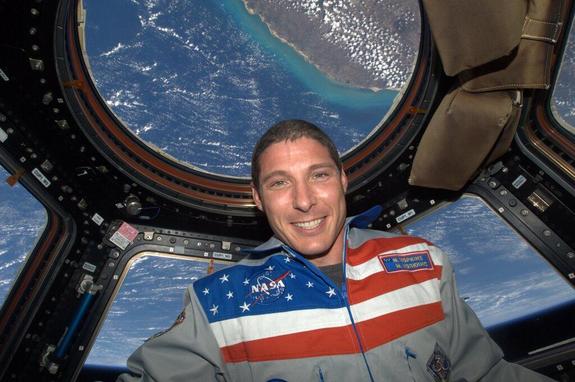 Mike Hopkins takes a selfie at the International Space Station. 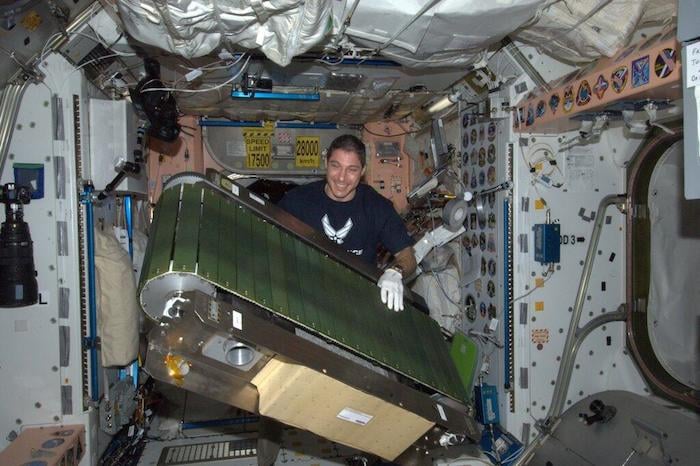 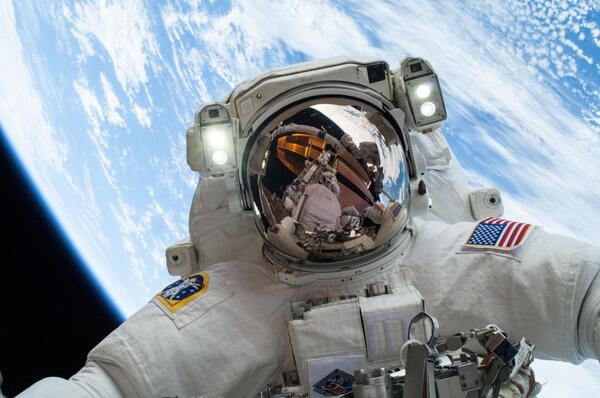 Mike Hopkins snaps what may be the best selfie in the universe during a spacewalk to repair the International Space Station.

Sat., Nov. 14, 8:56 a.m. -- This article has been updated with the launch date/time, which was changed by NASA from Saturday evening to Sunday evening.

Lake of the Ozarks native son Mike Hopkins will head to space on Sunday evening, part of an historic launch through a partnership with SpaceX and NASA. Hopkins and three other astronauts are headed to the International Space Station for a six-month stint. At the end of this mission, 51-year-old Hopkins will have logged nearly a year of his life in orbit.

This is the first crew rotation flight of the SpaceX Crew Dragon spacecraft on a Falcon 9 rocket following certification by NASA for regular flights to the space station as part of the agency’s Commercial Crew Program. The Crew-1 flight is carrying Crew Dragon Commander Michael Hopkins, Pilot Victor Glover, and Mission Specialist Shannon Walker, all of NASA, along with Japan Aerospace Exploration Agency (JAXA) Mission Specialist Soichi Noguchi to the space station for a six-month science mission.

NASA and SpaceX are now targeting 7:27 p.m. EST (6:27 p.m. CST) Sunday, Nov. 15, for liftoff of the agency’s SpaceX Crew-1 mission to fly astronauts from Launch Complex 39A at NASA’s Kennedy Space Center in Florida to the International Space Station.

Teams moved the launch by one day because of onshore winds and to enable recovery of the first stage booster, which is planned to be reused to launch the Crew-2 mission next year. The booster is expected to land on the recovery ship about nine minutes after launch.

NASA will provide continuous coverage - more than 30 hours - of the prelaunch, launch, docking and arrival activities for the first crew rotation flight of the SpaceX Crew Dragon spacecraft on a Falcon 9 rocket following certification by NASA for regular flights to the space station as part of the agency’s Commercial Crew Program.

The Crew Dragon is scheduled to dock to the space station around 11 p.m. Monday, Nov. 16. Launch, prelaunch activities, and docking will air live on NASA Television and the agency’s website.

Michael Hopkins is commander of the Crew Dragon spacecraft and the Crew-1 mission. Hopkins is responsible for all phases of flight, from launch to re-entry. He will also serve as an Expedition 64 flight engineer aboard the station. Selected as a NASA astronaut in 2009, Hopkins spent 166 days in space as a long-duration crew member of Expeditions 37 and 38 and completed two spacewalks totaling 12 hours and 58 minutes.

Born in Lebanon, Missouri, Hopkins grew up on a farm outside Richland, Missouri. He has a bachelor’s degree in aerospace engineering from the University of Illinois, and a master’s degree in aerospace engineering from Stanford University. Before joining NASA, Hopkins was a flight test engineer with the U.S. Air Force. In June 2020, Hopkins was nominated for transfer from the Air Force to the new Space Force.

Shannon Walker is a mission specialist for Crew-1. As a mission specialist, she will work closely with the commander and pilot to monitor the vehicle during the dynamic launch and re-entry phases of flight. She will also be responsible for monitoring timelines, telemetry, and consumables. Once aboard the station, Walker will become a flight engineer for Expedition 64. Selected as a NASA astronaut in 2004, Walker launched to the International Space Station aboard the Russian Soyuz TMA-19 spacecraft as the co-pilot, and spent 161 days aboard the orbiting laboratory. More than 130 microgravity experiments were conducted during her stay in areas such as human research, biology, and materials science. A Houston native, Walker received a Bachelor of Arts degree in physics from Rice University in 1987, as well as a Master of Science degree and a doctorate in space physics, both from Rice University, in 1992 and 1993, respectively.

Soichi Noguchi will also be a mission specialist for Crew-1, working with the commander and pilot to monitor the vehicle during the dynamic launch and re-entry phases of flight, and keeping watch on timelines, telemetry and consumables. Noguchi will also become a long-duration crew member aboard the space station. He was selected as an astronaut candidate by the National Space Development Agency of Japan (NASDA, currently the Japan Aerospace Exploration Agency) in May 1996. Noguchi is a veteran of two spaceflights. During STS-114 in 2005, Noguchi became the first Japanese astronaut to perform a spacewalk outside the space station. He performed a total of three spacewalks during the mission, accumulating 20 hours and 5 minutes of spacewalking time. He launched aboard a Soyuz spacecraft in 2009 to return to the station as a long-duration crew member. The Crew Dragon will be the third spacecraft that Noguchi has flown to the orbiting laboratory.