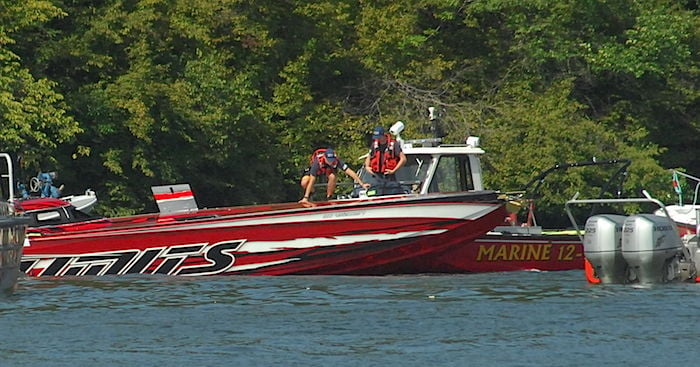 An emergency responder who was among the first on the scene after the Outerlimits catamaran tumbled through the air and slammed into the water recently got the chance to tell his story to a national news outlet. 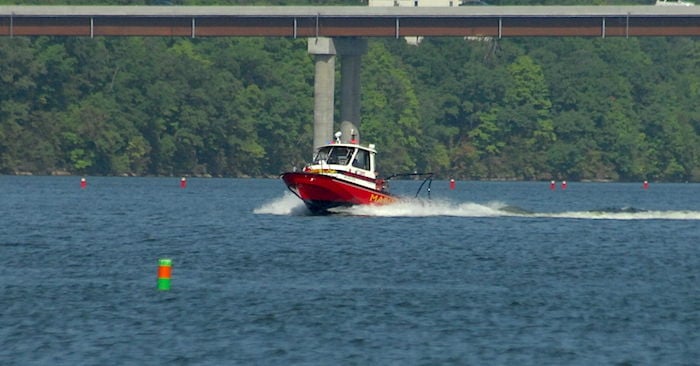 At the time of the crash, Ruda was on boat detail in Marine 12-29 located next to the finish line. After witnessing the horrific crash, Ruda said, “I knew it was time to go to work.” 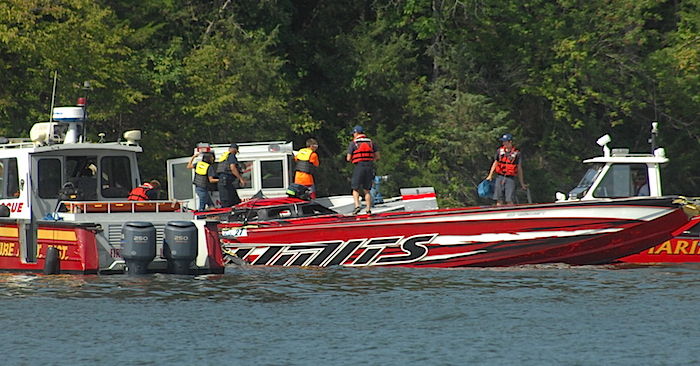 "The boat began to sink, so we went into rapid extrication.” 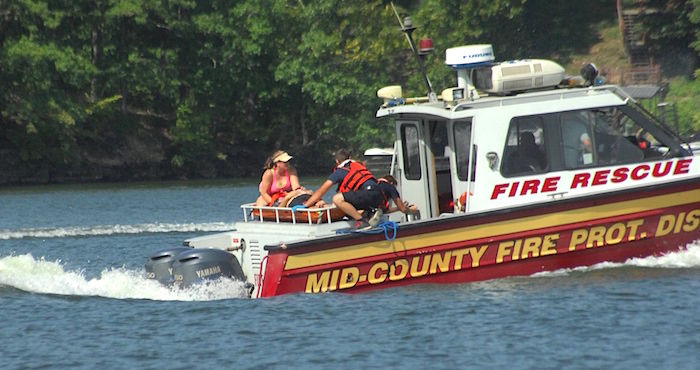 After the crash, Mike Fiore was transferred via the Mid County fire rescue boat to a waiting ambulance and a life flight to University Hospital in Columbia. 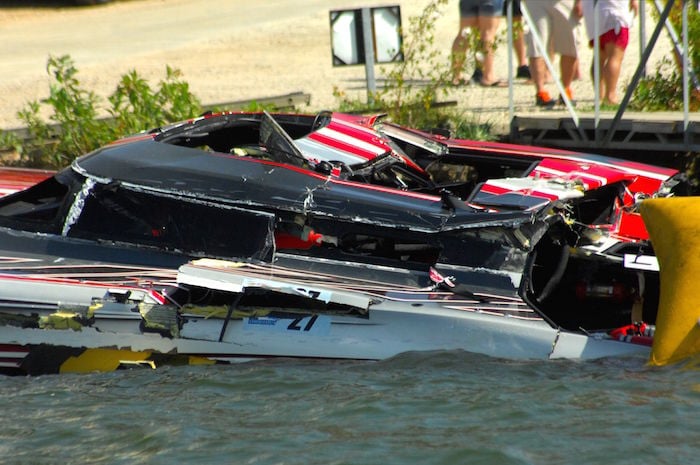 Unfortunately for throttleman Mike Fiore, the catamaran landed upside down on his side of the boat. The cockpit capsule was crushed, and Fiore was trapped until rescuers could extract him. 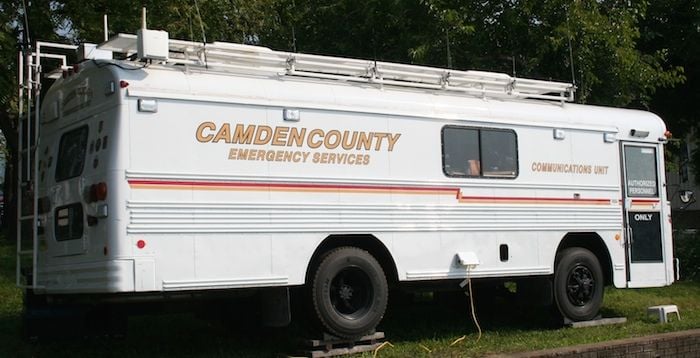 The tragic crash at the 2014 Lake of the Ozarks Shootout gained worldwide attention and left a void in the powerboating community.

This article originally used the incorrect last name to refer to the individual who passed away as a result of the crash. In fact, Joel Begin survived and Mike Fiore passed away four days after the crash.

LakeExpo.com apologizes for the error.

LAKE OF THE OZARKS, Mo. — The tragic crash at the 2014 Lake of the Ozarks Shootout gained worldwide attention and left a void in the powerboating community. An emergency responder who was among the first on the scene after the Outerlimits catamaran tumbled through the air and slammed into the water recently got the chance to tell his story to a national news outlet.

Sunrise Beach Fire Protection District Firefighter Jonathan Ruda was interviewed for the MSNBC television show “Caught on Camera” on Thursday, Dec. 11. He spoke to the New York camera crew about his role in the Outerlimits powerboat crash rescue. The episode with his interview is scheduled to air sometime in March 2015.

The crash occurred on Saturday, Aug. 23, 2014, and resulted in the death of powerboat racer and Outerlimits President Mike Fiore.

The Outerlimits catamaran driven by Joel Begin and throttled by Mike Fiore crashed at the finish line. As the Outerlimits approached the finish line at the end of the one-mile course, the bow caught air and lifted, sending the boat flying out of the water, flipping end-over-end, over 50 feet in the air.

Once the boat came to rest, he, along with SBFPD Firefighter Austyn Moreland and Northwest Fire Protection District Dive Team member Al Leon, rushed to the crash scene.

“We started assessing the first patient (driver Joel Begin). We found he was ambulatory and we were able to assist him off the boat, and on to the Mid County 929 rescue boat,” Ruda said. The fire boat transported Begin to an ambulance takeout point next to the Hurricane Deck Bridge. The ambulance then took him to Lake Regional Hospital in Osage Beach.

Unfortunately for throttleman Mike Fiore, the catamaran landed on his side of the boat and came to rest upright. The cockpit capsule was crushed, and Fiore was trapped.

“We then began assessing the second patient for extrication,” Ruda recalled.

“As Moreland turned to get the medical supplies, the boat began to sink, so we went into rapid extrication.”

The firefighters were able to pull Fiore out and move him to the back of the boat. They then transferred him via the Mid County fire rescue boat to a waiting ambulance and a life flight to University Hospital in Columbia.

Also near the finish line was the hub of race safety, the Camden County Emergency Services Unit (ESU) led by Camden County 911 Director Sgt. David W. Edwards. The ESU is a self-contained communication center on wheels. Edwards was able to coordinate the extensive information-sharing network between all the needed levels of emergency agencies and race officials.

Positioned just south of the ESU was the Race Incident Command tent, directed by Incident Commander and Sunrise Beach Fire Protection District Chief Dennis Reilly. The ESU enabled Chief Reilly to communicate with more than 60 EMS personnel that were stationed on land, in the air and on water. The ESU also supplied incident command with a live video feed of the race course. Fire Chief Reilly directed the entire rescue operation from incident command.

Firefighters and emergency personnel train year-round on land and water for just such an incident. Ruda is a member of the Mid County Regional Dive Team, which is made up of firefighters from the Mid County, Sunrise Beach, Northwest and Osage Beach Fire Protection Districts.

“Due to the nature of the Lake area, we train extensively in water,” Ruda said. These firefighters spend a lot of time out in the boat training on how to get victims out of the water, using a backboard in the water to immobilize a victim’s spine. The dive team practices in the Westlake Aquatic Center pool on cold days, and they also train in ice rescue suits in the lake in the winter, so that they are ready at all time in every season to rescue.

Speaking of the Shootout accident, Ruda said, “We all worked very cohesively together for being a multi-company team. It went very smooth. Of course I would have liked to have seen a different outcome.”

Fiore lived for four days after the accident, but Ruda said his team did all they could.

“Our job is conducting the emergency care at the scene with the goal of getting our patient to the hospital, and we accomplished that goal.”

“We don’t want to see these type of accidents happen, but when they do, we are here, and this is what we train for. It is a tragedy nonetheless.”

Ruda plans to be at the 2015 Shootout next August.

This was the first fatality to result from a crash at the Lake of the Ozarks Shootout, which has run for 26 years.

LAKE OF THE OZARKS, Mo. — Less than an hour after racing began, tragedy struck the 2014 Shoo…

SUNRISE BEACH, Mo. — The cold weather may be inconvenient for some, but the Sunrise Beach Fi…

Racing for Good: Charities are the heart of the Shootout

LAKE OF THE OZARKS, Mo. — The 10 days of the 25th Anniversary Lake of the Ozarks Shootout se…

LAURIE, Mo. — The fountain of youth has been discovered at Lake of the Ozarks. Donations fro…

Read more about the crash and view photos here.

SARATOGA, Wyo. — Powerboaters crave speed wherever they can get it; this winter, members of the Atlantic Coast Powerboat Association are feedi…