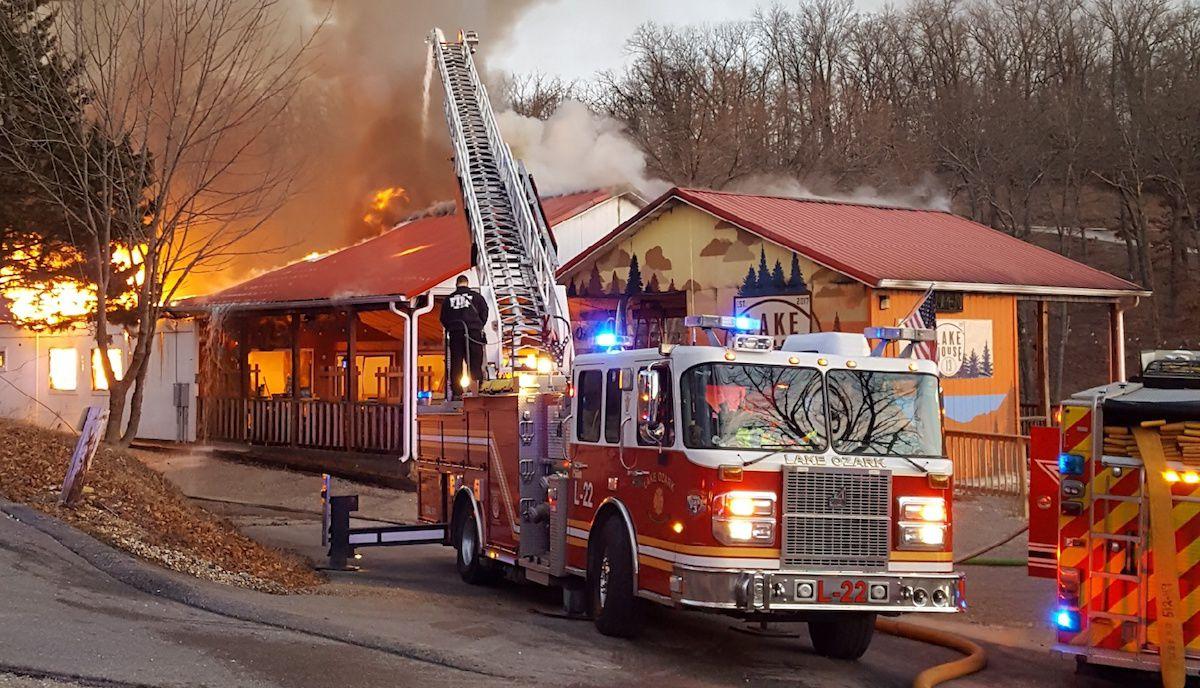 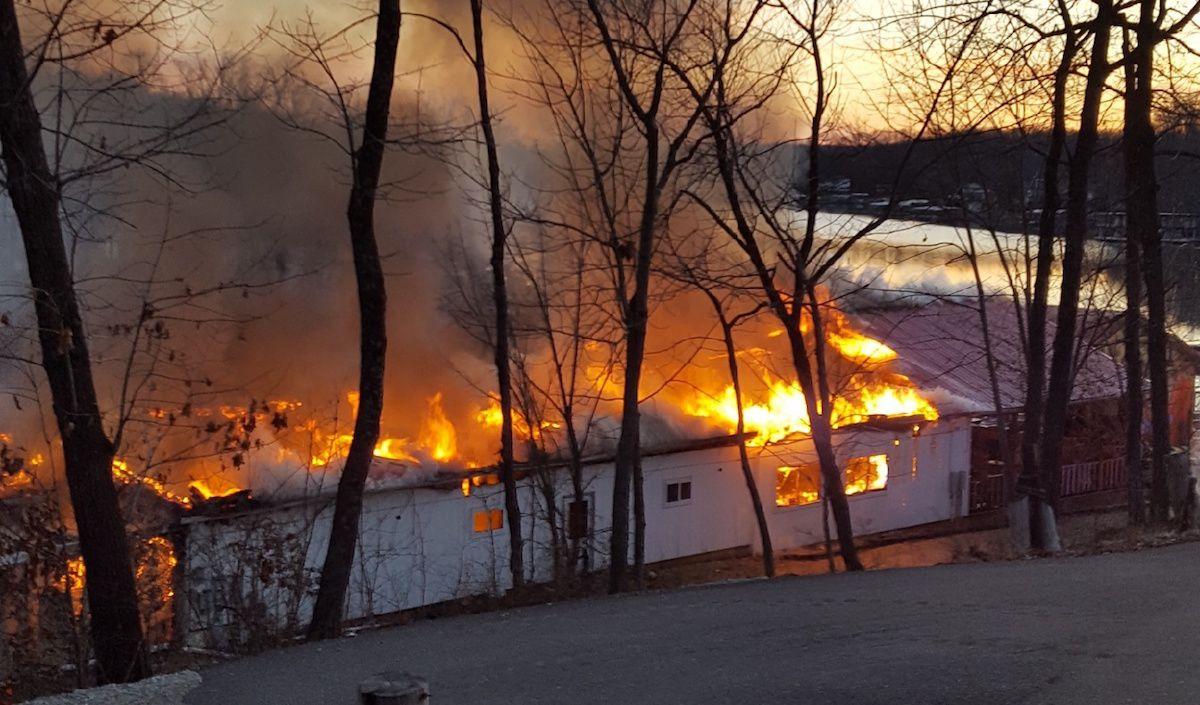 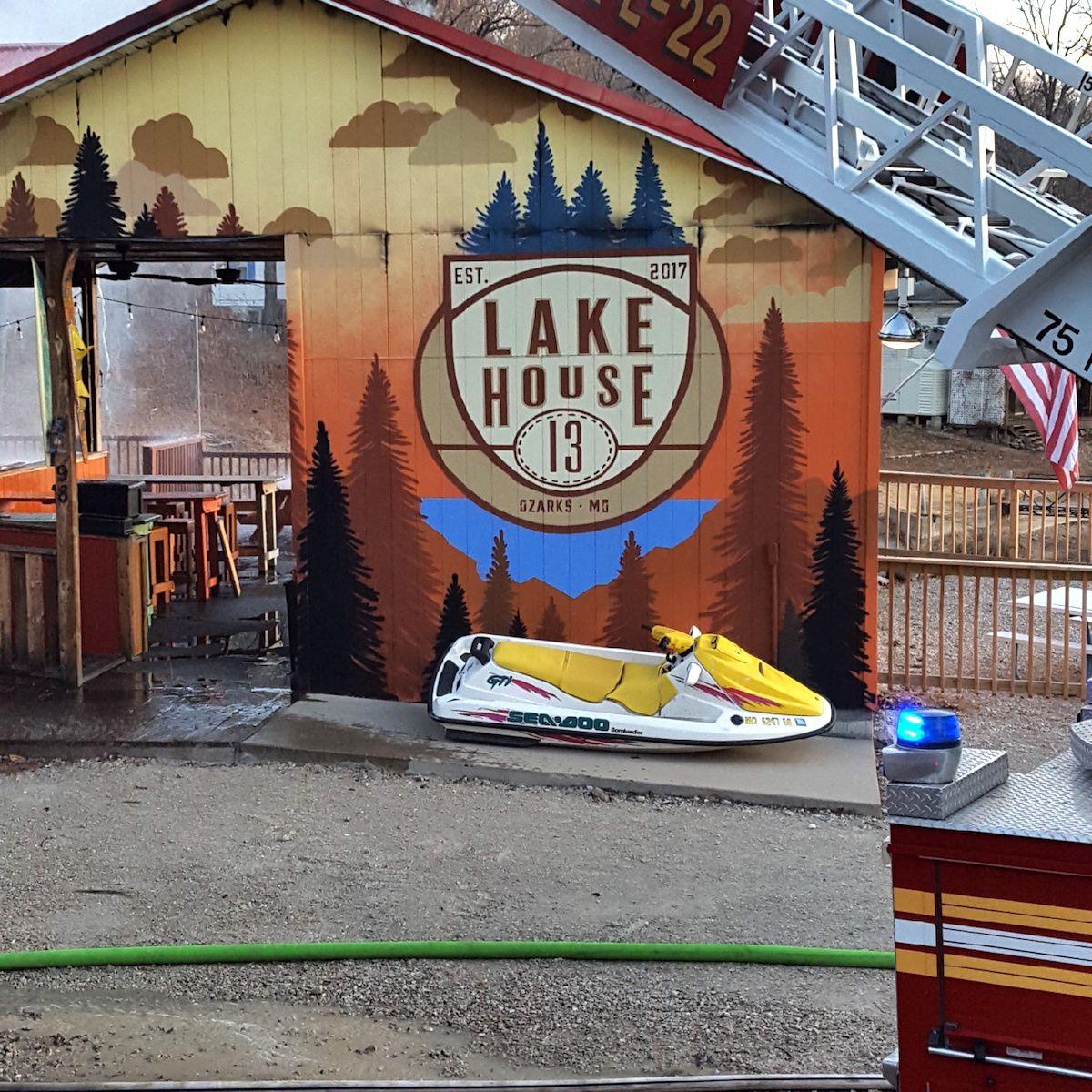 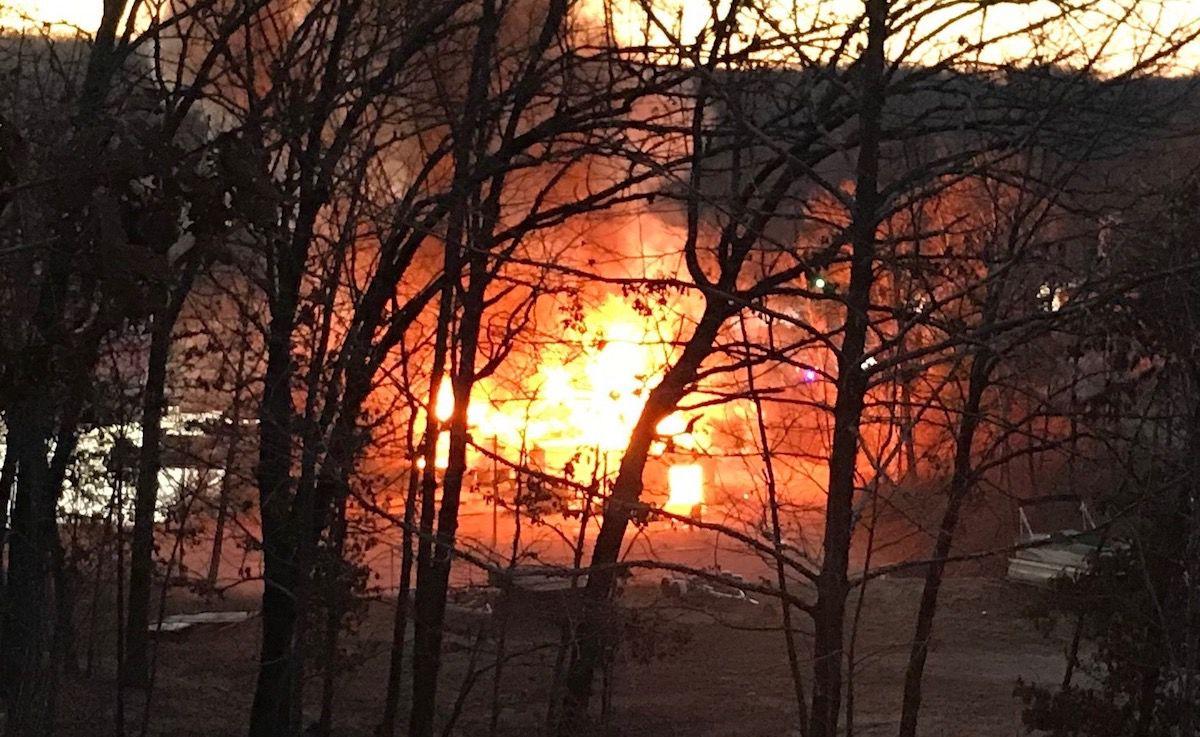 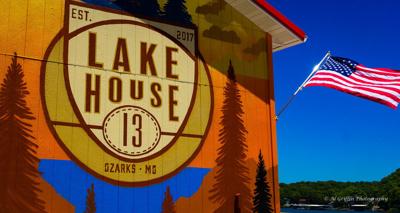 All the water in the Lake couldn't save Lake House 13 on Tuesday morning, when the building was destroyed by fire.

The Sunrise Beach Fire Protection District responded to a 911 fire call at 6:05 a.m. on Tuesday, Feb. 27, with a report that Lake House 13—a lakefront restaurant/bar at the 13 Mile Marker (Chimney Cove) and on Oasis Circle in Sunrise Beach by land—was ablaze.

According to Sunrise Beach Fire Protection District Fire Chief Dennis Reilly, first arriving units were on the scene within 12 minutes after the tone. Firefighters found 50 percent of the building consumed in fire. “Fire had already broken through the roof,” Chief Reilly said. “This was a substantial fire.”

Lake Ozark, Osage Beach and Rocky Mount Fire Protection Districts responded to a call for mutual aid. Lake West Ambulance and the Camden County Sheriff’s Department also assisted. Firefighters pulled large lines and Lake Ozark fire moved up to the front with their master stream device ladder truck. This device pumps out 1,000 gallons of water per minute. “There was no fire hydrant near the building, but luckily the fire was sitting next to a boat ramp, and we were able to draft water out of the Lake of the Ozarks and pump it to a pumper and ladder truck,” Chief Reilly said.

But the low water level made things challenging as they pumped water out of the Lake of the Ozarks. "The lake level is down, so as we drafted water, we picked up rock and debris." Chief Reilly said. "We had to shut down and clear out the streamer."

The fire was brought under control by 6:54 a.m., but the building was a total loss.

A GoFundMe Page has been started to help pay the insurance deductible on the building. Click here to donate.

Chief Reilly explained, "It was difficult to do anything but stop the fire from spreading. As with a lot of neighborhoods in our district, homes and buildings sit empty during the off-season, so fires can be well advanced by the time we are notified. Not having a fire hydrant makes it even more difficult, even when there is a lake nearby."

"As is normal procedure with a large fire like this, the State Fire Marshal’s office will assist in the investigation into the cause of this fire," Chief Reilly said.

"This is a very sad situation for the owners, and the community, it was a popular restaurant."

Approximately 20 firefighters and six apparatus responded to this fire. There were no civilian or firefighter injuries.

Chief Reilly said the district has been very busy. The area is growing, and new people are moving into the district all the time. “We are constantly looking at operations to implement things that will make us more effective,” he said. At this point he says staffing is key, and the board is looking at adding more firefighters. “We were lucky our mutual aid partners could get to us quickly. That helps in large fires, and we are seeing large fires like this on a semi-regular basis.”

This is not the first time the building has burned. More than a decade ago, it caught fire, when it was called The Big Easy. "I was told a marina and the Big Easy restaurant both burned down on this same site, before my time as chief," Chief Reilly said. The building changed hands and hosted multiple businesses, and then, in 2017, Dustin Racen and Bartender Ron Westgate brought vibrant life to the building with Lake House 13, and they opened less than a year ago: on May 3, 2017.

PAST ARTICLES ABOUT LAKE HOUSE 13

Dustin Racen may be a 21st century businessman, but his Lake House 13 restaurant and bar is …

It's been a long time coming. Not since The Big Easy, more than a decade ago, has Chimney Co…

At Lake House 13's Tiki bar, Ron Westgate pours and stirs while chatting with customers. His…

Spring Boater's Guide to Lake of the Ozarks Restaurants & Bars

You survived the winter, and—good news!—your favorite restaurants and bars around the Lake are opening for the season! This week marked the fi…

Spring Boater's Guide to Lake of the Ozarks Restaurants & Bars

Memorial Weekend marks the opening of most bars and restaurants around the Lake of the Ozarks. Here's a list of who's open to help you plan yo…

So sad for Dustin...this place was really taking off! Hoping everything works out for you and Mark.