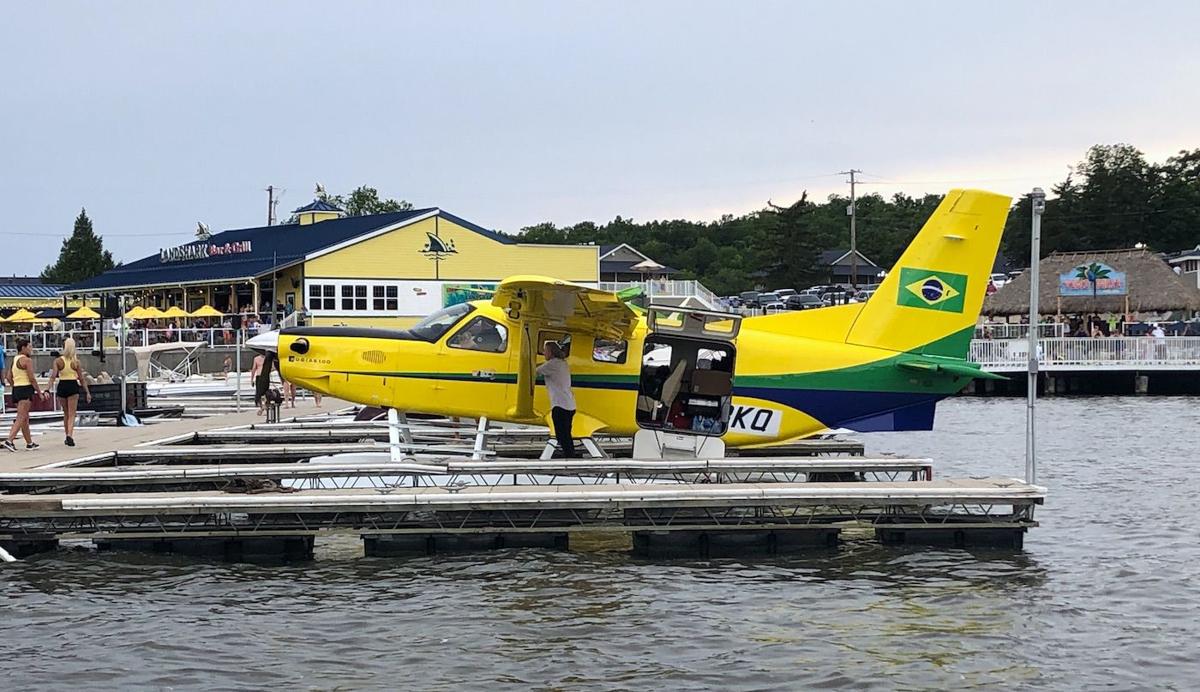 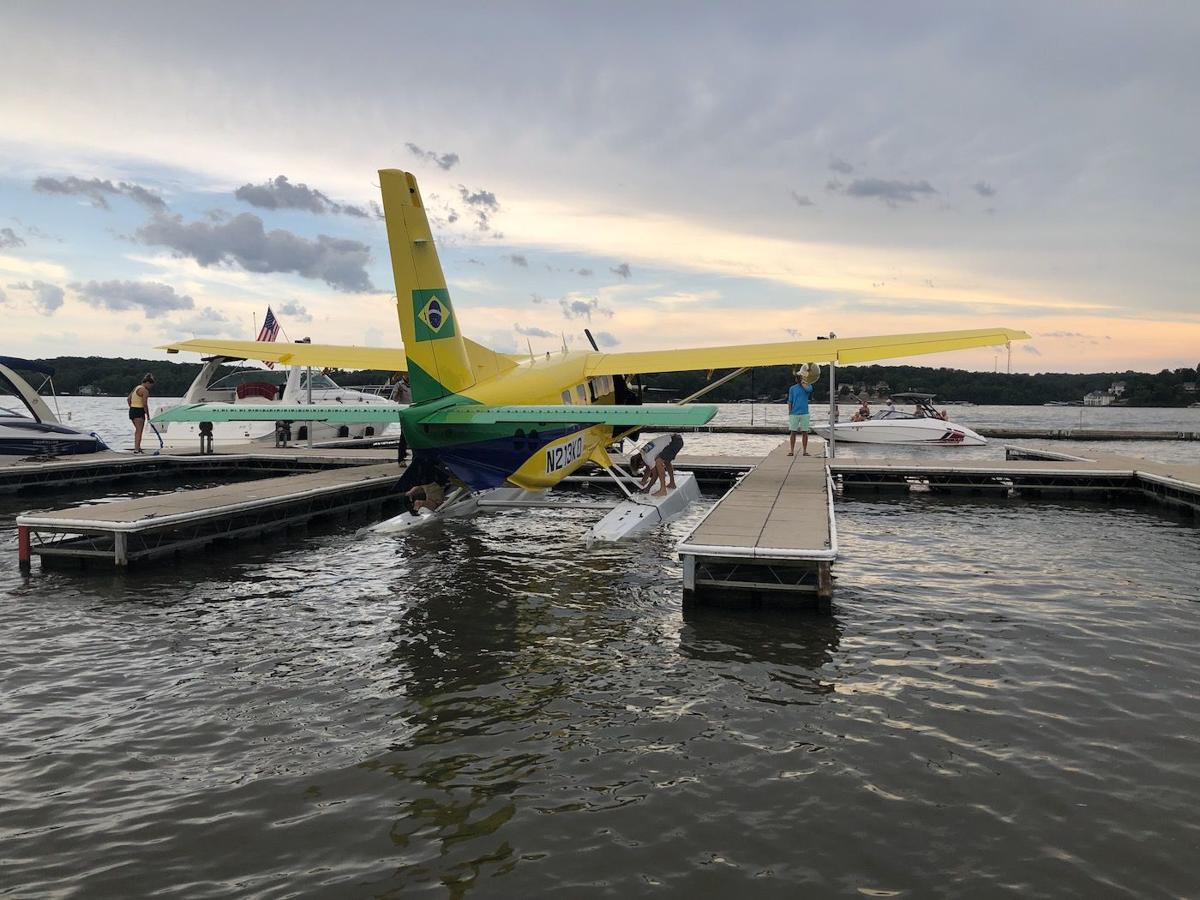 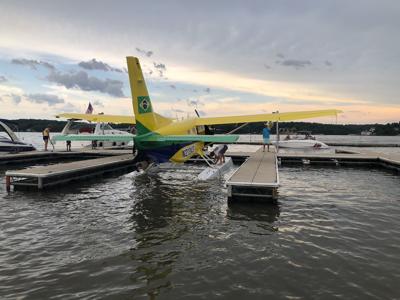 Making our way down the Lake, with thunderheads looming to the west and the water finally settling after a mass exit of boaters from the recently-ended Lake Race... the LakeExpo crew spotted something in the sky.

A yellow seaplane, flying at an altitude that suggested a planned and imminent landing. On the left, we were approaching Margaritaville Lake Resort, and suddenly we all wondered: could we have stumbled across the arrival of the legendary Jimmy Buffett?

For context: Jimmy wrote the song "Margaritaville," after which the family of resorts is named. And he is known to be a fan of flying seaplanes... and of visiting Margaritaville resorts in his seaplane. But the Margaritaville folks are tight-lipped about if/when Jimmy might arrive. It—they simply say—could happen.

The plane lined up along the runway of the main channel, and executed a flawless landing. Then, it idled over to Margaritaville.

Had the stars aligned? Did we just stumble upon the chancest of chance encounters? We had to know.

At the docks, a substantial crowd was gathering. Sunburned vacationers with a drink in hand drew near. Boats milled around the cove; the presence of our LakeExpo boat made onlookers even more suspicious. "You know something, don't you?!" shouted one captain with a grin. We really didn't. The plane's wings extended into the airspace of the boat slips on either side of it. Someone said they had to get special permission to dock there, since they were using three slips.

Three men piled out of the Kodiak-100 single-engine, and it soon became clear that none of them was a famous singer. The plane was being operated by Florida Seaplanes, an outfit that teaches people how to fly seaplanes. The men had flown to Lake of the Ozarks from Florida.

Standing on the dock, looking for a chance to talk, I met a young guy (Mark, was it?), who marveled at the money represented by toys like this seaplane and the half-million-dollar boats in the cove. Upon realizing I'm with LakeExpo, he enthusiastically shook my hand: "The LakeExpo I follow on Facebook?! Cool!" I always love meeting LakeExpo readers—on the Lake, at the boat shows, in the community. It reminds me there really are people on the other side of this keyboard, and (for the most part!) they're likeable. Mark treated meeting me like it was a big deal, which felt kinda funny, and kinda nice. Glad somebody got to meet a celebrity today.

"We thought you were Jimmy Buffett," I told the pilot, who was busy securing the plane and not much up for talking.

"Oh... Margaritaville," he said, with a chuckle. I didn't feel like he understood the gravity of the situation, but I didn't want to be a pest, so I spoke with the guy who looked less busy, and less in charge.

Pedro, an easy-going fella with grey hair pulled into a ponytail and trendy shoes, was from Switzerland, and was learning to fly this bird. "They are the experts," he said, gesturing to the other two men.

What must they think about their hours-long encounter with this place and its people?

He'd never been to Lake of the Ozarks—one might say "how he got here, he hadn't a clue"—and they only planned on staying one night. Where would they be going tomorrow? He had no idea. "Wherever is interesting, we'll stop and stay there," he said.

How about the Brazil flag on the tail, I ask. "Yes, it goes to Brazil, sometimes," was his reply. And that was all.

A mystery wrapped in an enigma? Or just a few people—like so many—spending the night on the shimmering waters of the most unique lake in the Midwest? Either way, the encounter felt significant, even if the conversation didn't.

We'd been on the water for 10 hours, and it was time to go home. As we shoved off, the dock girls asked, "Did you think it was Jimmy?"

They said with a sheepish grin, "We did too."

The Extraordinary Life Of Lake Of The Ozarks' First Seaplane Pilot

From the days of open cockpits and canvas-covered wings, Tommy Webber had flown for three air forces and had trained hundreds of pilots in two world wars. Later in life he had charmed countless tourists and had taken them on a magical ride over the lake that he had come to love.