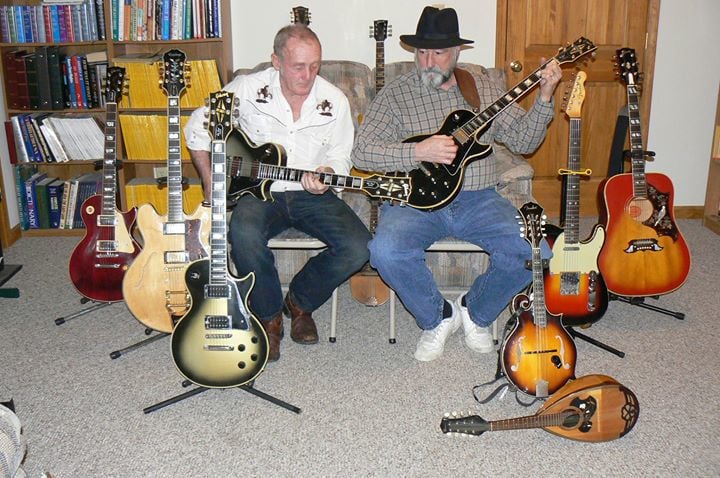 "Me + Jim" play instrumental renditions of rock music primarily from the 60'S and 70's, on vintage guitars, performing familiar tunes at conversational volume.

"Jim," that is Jim Biggs, has been pickin the guitar since he was just a sprout. He has performed in concert with such big names as Chuck Berry, Barbara Mandrel, and Barbara Fairchild. Jim played the Hotel Circuit pickin' country and rock music during the 70's and 80's all across the country. He's played with numerous familiar country bands in this area and is well known amongst musicians far and wide. He owns a pile of vintage guitars, mostly Les Pauls, and has been known to bring several of them to the shows and switch guitars as they become too hot to handle!

As for "Me," Frank Phelps started playing the Guitar and mandolin with his dad and brothers and sister many moons ago. At that time us kids played whatever dad played and mom sang, olde timey music is what they call it today. We played at a many a hootenanny! And as Frank became a teenager he started to play rock music and performed in many bands throughout the Midwest. Frank has performed from California to Canada in night clubs, hotels, and basements, doing concerts, dances, parties, weddings and festivals.

Together, Me + Jim play great instrumental music, with a song list of over 200 songs from the 20’s through the 70’s, sure to please the whole family!

Overlooking the Lake of the Ozarks at the 14 mile marker Shawnee Bluff Winery offers oven brick pizza, wine tastings and some of the best live music around the Lake. Join us for indoor and outdoor dining and live music Friday-Sunday.

A Harley-Davidson Boat? This Rare Throwback Still Cruises Lake Of The Ozarks

6 Picturesque RV Campgrounds At Lake Of The Ozarks

OPINION: Lake Of The Ozarks Bikefest The Next Sturgis? Big-City Media Keep Getting It Wrong

Does Your Lake Condo Need Air Duct Cleaning? Here's How To Know

Cheers To Hard Work & Keeping The Lake Afloat (Diploma, Or None)

Growing Up On Lake Of The Ozarks: Childhood Memories Of My Favorite Place