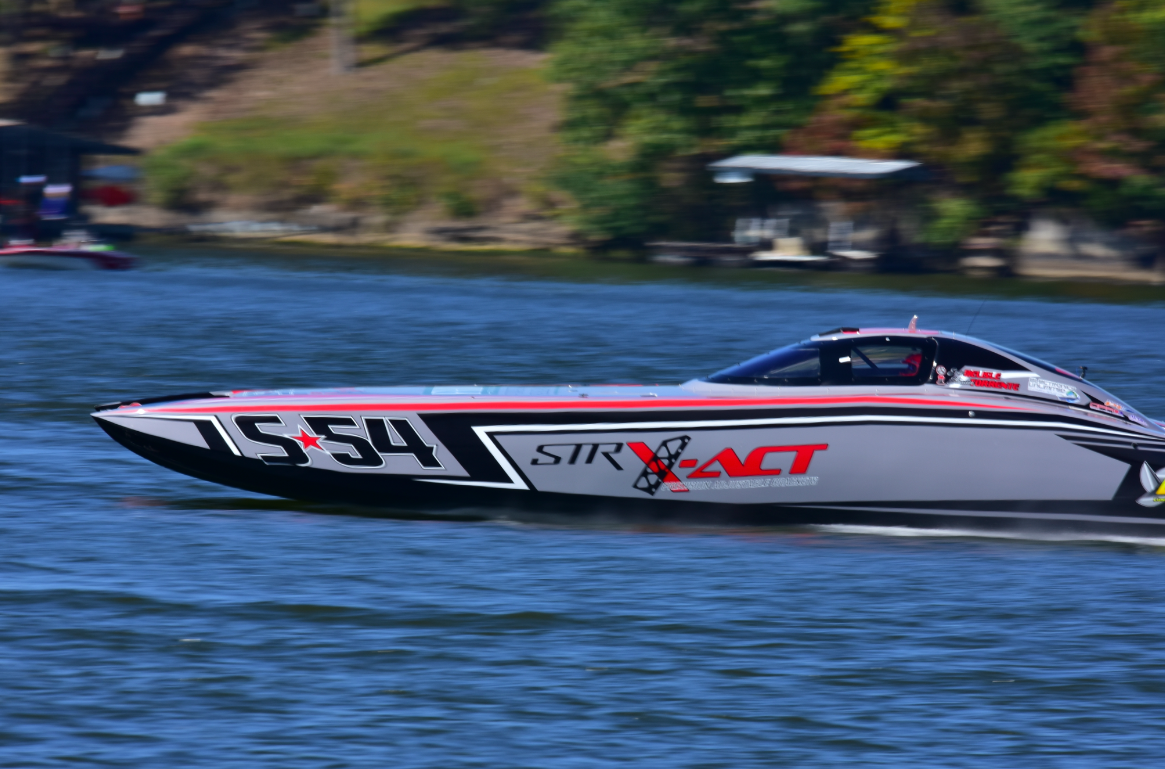 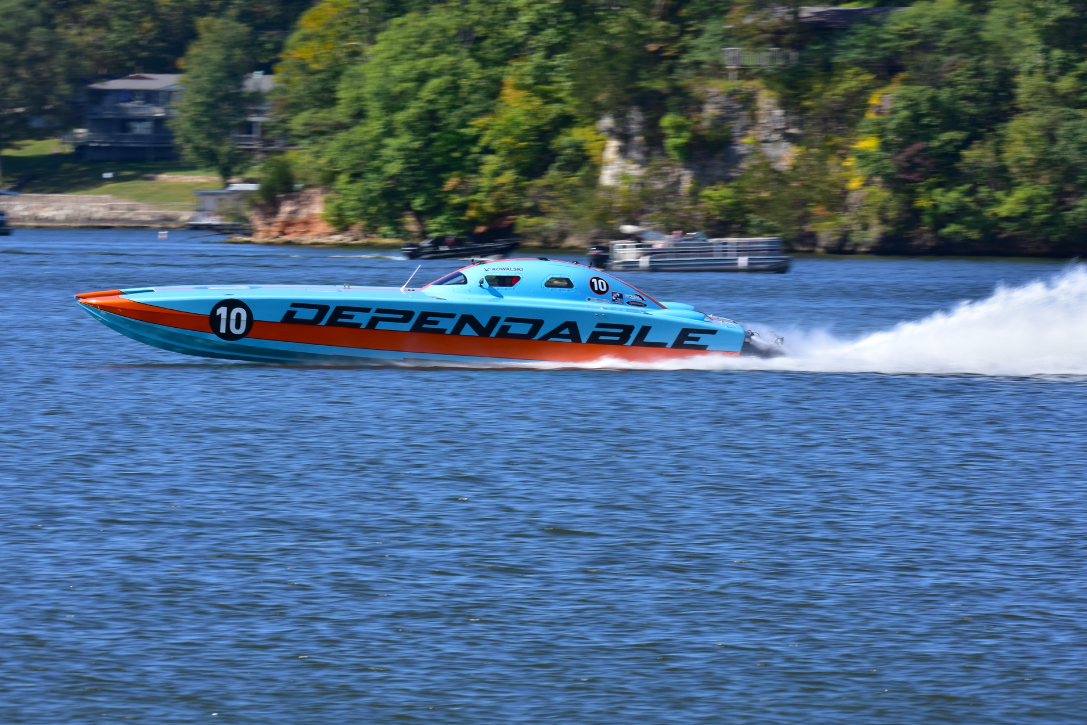 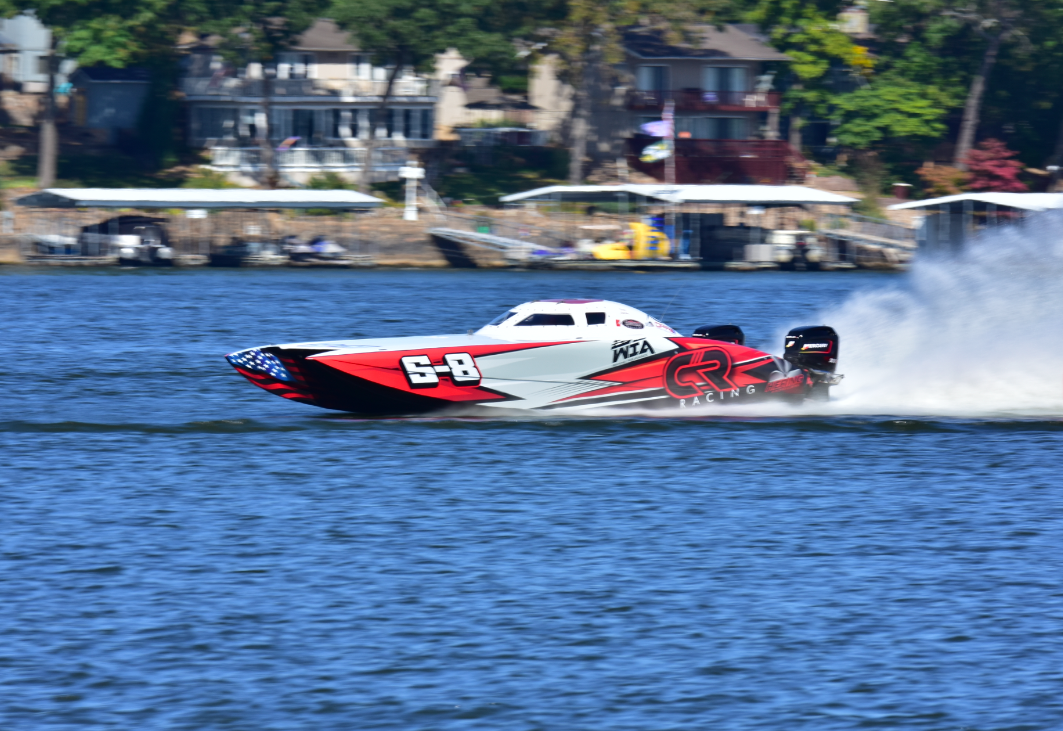 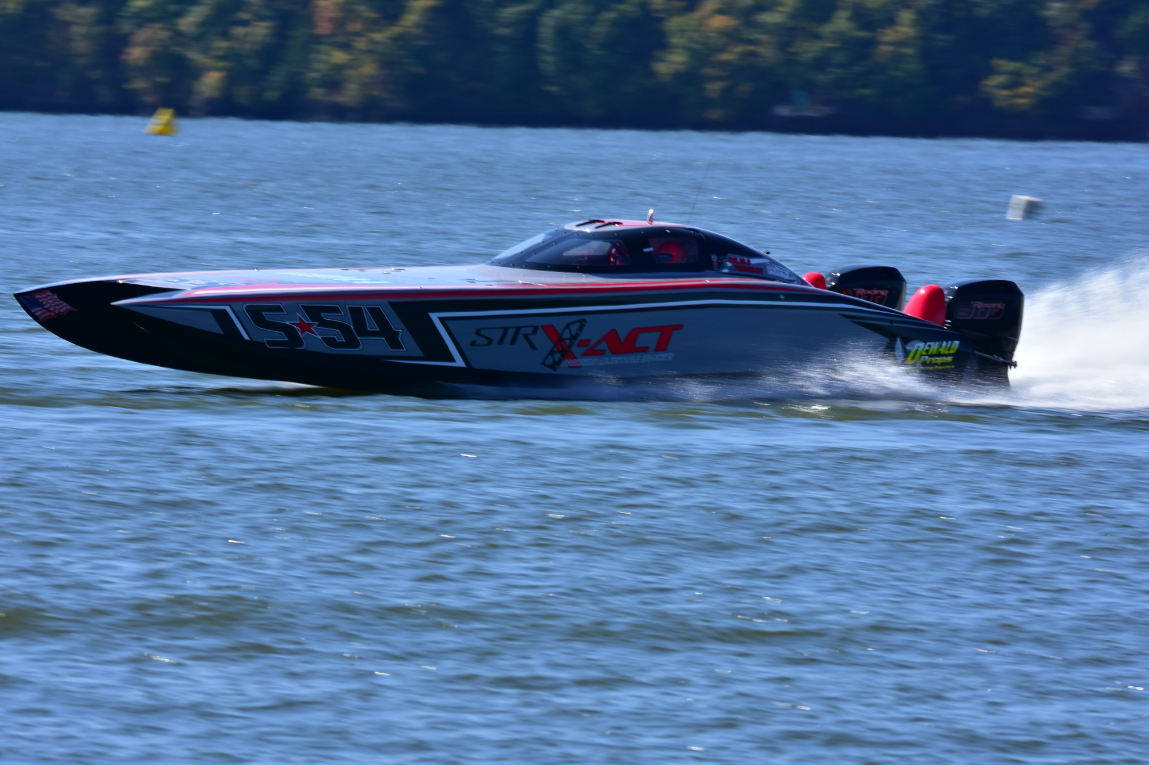 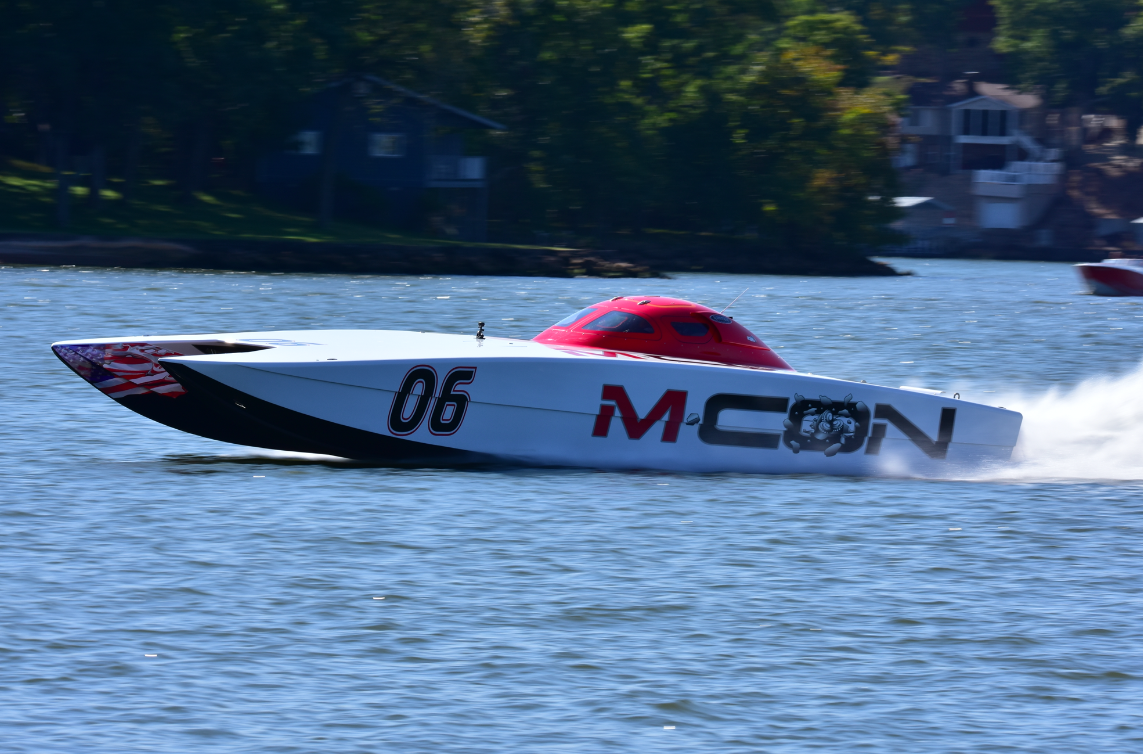 What began as a chilly morning turned into a beautiful day for boat racing on the Lake of the Ozarks. In a bit of an unusual start, several Super Cat contenders were ruled out before the green flag ever waved. But the rocky start for the Super Cats contrasted with a fantastic race between the Super Stock boats. The final wave of the checkered flag saw the Gone Again and STR xAct taking the wins for the Super Cat and Super Stock classes respectively.

Dependable Marine was one of the first boats the crane put into the water on Friday morning and was, unfortunately, one of the first pulled out. While making test runs the team ran into trouble and craned the boat out before the first heat started. SV Racing’s 39-foot Outerlimits catamaran was also out of the race before starting when they lost their power steering pump during test runs. The surviving boats, M-CON and Gone Again made the start line to face-off for the first heat. Lap one ended with M-CON taking a solid lead. The Skater 438, driven by Myrick Coil, with Tyler Miller on the throttle, fell behind quickly when they lost an engine near the 6th lap. With M-CON falling behind, and eventually leaving the race course, Gone Again took the lead and the win, being the only boat to finish the first heat.

For the second heat, SV Racing was able to get their power steering pump fixed and joined Gone Again, M-CON and Miss GEICO at the start line. While Miss GEICO made an exhibition run, M-CON limped along in an effort to not stress their remaining motor and finished their first lap before pulling into the pits. Gone Again found themselves facing off with SV Racing for several laps before Miss GEICO and the SV boat had mechanical issues and both pulled off the course, leaving Gone Again to win the second heat once again as the only boat finishing.

Brett Manire, with Performance Boat Center, told spectators on Friday the teams would be working together to get M-CON and the Dependable boat back on the water for Saturday racing. Performance would be providing the M-CON with an engine, while M-CON was supplying Dependable with the parts they needed. Both teams would likely be working overnight in order to race on Saturday. Manire emphasized that this kind of event really is all about having fun for everyone, and teams often work together to make sure as many boats as possible can get out on the water to make for a great race.

Caddyshack started off in the first pole position, but STR quickly gained a lead, which only grew larger as the laps passed. CR Racing was forced to head back to the pits when they began taking on water, leaving eight boats to compete. The STR xACT boat, driven by Eric Belisle with Shawn Torrente on the throttle, maintained the lead in their 32-ft Doug Wright cat for the duration of heat one. Friday marked Belisle’s second race ever. Whether from beginner’s luck or a whole lot of practice, Belisle and Torrente walked away from heat one with the win.

With the CR Racing boat hoisted out of the water for repairs and knowing many teams would be making adjustments for the second heat, the STR team wasn’t sure what to expect. They briefly chased Jackhammer around the 9-turn course, eventually gaining a lead and holding it until taking first place once again.

Overall, it was a fantastic day on the water for race fans with an even better one in store for Saturday’s races which kick off at 3:15 p.m.