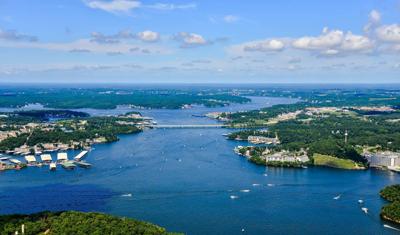 LAKE OF THE OZARKS, Mo. — For two months Midwesterners have been fleeing to the Lake of the Ozarks from cities and states shut down by coronavirus, and local business owners say they’re seeing signs the coming Memorial Day weekend could bring an even bigger surge of vacationers than normal. Specifically: vacation home and hotel reservations are reaching unprecedented levels for some.

Russell Burdette, owner of Your Lake Vacation, one of the Lake area’s largest vacation rental management companies, said, “This will be the first Memorial Day that we have ever sold out. Never had more than about 60 percent occupancy in our history for this holiday.” Your Lake Vacation manages more than 100 Lake of the Ozarks vacation rental properties. John Custer, owner of Four Seasons Property Management, said the same is true for the 45 properties he manages. “I’m sold out for this weekend,” Custer told LakeExpo. He added, “I booked the majority of these reservations in the last ten days.”

This deluge of vacation rental bookings comes after a few panic-inducing weeks in March. Six weeks ago, Burdette said, he had nearly zero dollars in sales for the week: during what is normally one of his busiest times of the year. That was right when the Covid-19 shutdowns began, and uncertain Americans were fleeing from everything: social events, the stock market, and vacation reservations. Things picked up for the four weeks after that, but Burdette says sales were less than half of what they should have been. Then, two weeks ago, he had a near-record week in sales. The next week, sales more than doubled and Your Lake Vacation set a sales record that left Burdette stunned. “Phones are literally ringing off the hooks,” he said. “We were down 25 percent [for the year] on May 1st. Right now we are down less than 10 percent.”

Custer figures in the past couple of weeks he has talked to about 50 people per day. Calls have nearly tripled, he said, with three different types of calls coming in. Many people are calling just to find out whether the Lake is open for business. “Everything is open, come down!” Custer said he replies; many callers can hardly believe it. Secondly, a large number of people are still cancelling their vacation reservations, concerned about Covid, Custer said. But they’re more than compensated for, by the third type of caller: people ready to come to the Lake. “The majority of my business is coming from Illinois,” Custer said. A moment’s reflection reveals why: “Those people are locked down and they’re wanting out,” he figured. In all, he estimates about half of the people who call are worried about coming to the Lake, and the other half are not concerned and are ready for boating and sunshine at the nation’s most popular recreational lake.

A quick search on AirBnB.com or VRBO.com for reservations for four people at one of Lake of the Ozarks' thousands of vacation rental homes this weekend offers slim pickings: only a few hotel rooms left on VRBO, and a handful of pricey listings on AirBnB, most of which are nearly an hour from the Lake.

Local hotels say they’ve seen a resurgent in reservations as well. “They have increased tremendously over the past couple of weeks,” said Nicole Kever-Torres, Director of Sales & Marketing for Camden on the Lake. Kever-Torres says Camden was nearly empty in the thick of the coronavirus shutdowns, but things started picking up two weeks ago: hotel reservations and curbside/dockside delivery for H. Toad’s restaurant improved and were often weather-dependent. Then in the past week, reservations have exploded, and Camden on the Lake is sold out for lodging on Memorial Day Weekend. They typically sell out for this weekend, which signals the start of summer vacation and the busy season at the Lake, but Kever-Torres says the bookings came earlier and faster than in previous years. “We are expecting a very, very busy weekend,” she said.

Margaritaville Lake Resort has also had strong reservations for this weekend. Director of Sales Ann Walters said, "We will be certainly busier than we have been the last two months." Margaritaville relies heavily on convention business, and virtually all events and conventions were cancelled across the country due to the coronavirus shutdowns. That means the recovery for places like Margaritaville will take longer, but Walters says things are trending in the right direction.

Both Walters and Kever-Torres emphasized their hotels are taking extra social distancing precautions, particularly in restaurant spaces like Landshark Bar & Grill and H. Toad's. Camden on the Lake is also providing more areas for people to enjoy this weekend’s concerts, so concertgoers can keep more space between one another.

View upcoming events for Memorial Day Weekend at the Lake

The massive upswing in vacation bookings has not just been for Memorial Day: Custer says he’s expecting an extremely busy summer. The first quarter of 2020 was bad, he acknowledged. Spring golfers backed out of their reservations, and the overflow business he receives from conventions held at local hotels dried up. But the next two quarters appear poised to more than make up for it. With an increasingly open-for-business Missouri, a destination (Lake of the Ozarks) whose primary activity (boating) is perfectly suited for social distancing, and many May events being rescheduled for September, Custer says he doesn’t expect to come up for air until October. Business owners at the Lake, who depend on a robust vacation season to carry them through the lean winter months, wouldn’t have it any other way.

Lake Of The Ozarks Fireworks Guide For Memorial Day Weekend 2020

Memorial Day is Monday, May 25, and there's no better place to spend the weekend than at Lak…

Lake Of The Ozarks Boat Sales Broke Multiple Records In April, In Spite Of Covid

LAKE OF THE OZARKS, Mo. — The economic fallout from Covid-19 shutdowns has rippled across th…

“It’s not dead!” said Matt Schrimpf, when asked how the Lake of the Ozarks real estate marke…

Lake Of The Ozarks Makes National News, And That Will Attract More Vacationers

Photos of packed pool bars and seas of sunburnt skin went viral over the weekend, as Lake of the Ozarks made national news for its massive inf…