News
Weather
Boating
See & Do
Marketplace
If You Like LakeExpo.com, You'll Love The NEW App

Two Lake area congressmen along with the Missouri Department of Natural Resources are pushing back against the Environmental Protection Agency's (EPA) plan to put Lake of the Ozarks, along with approximately 40 other Missouri waterways, on the "impaired waterway" list.

Vicky Hartzler and Blaine Luetkemeyer have spoken out against the EPA’s decision in a letter to Mr. Edward H. Chu, the Acting Regional Administrator for Region 7 of the EPA. The letter cites unverified data, data that is out of date, inadequate information from EPA to Department of Natural Resources (DNR), inconsistent criteria, and the sheer size and complexity of the Lake of the Ozarks, as reasons for the EPA to reconsider declaring the Lake "impaired."

“The listing of these additional water bodies should not be taken lightly and necessitates thorough and analytical consideration as it would have significant impacts on families, landowners, small businesses, and the State and region’s economy,” said the letter.

The EPA added 40 bodies of water to the DNR’s proposed list of impaired waterways in January. The EPA cited levels of chlorophyll-a, an algae byproduct that measures the amount of algae in the water, that were above agency's impairment level. High algae levels can cause green scum, low oxygen levels and, in extreme cases, fish kills.

“Multiple fish kills occurred in the lake during this period and in 2018, the Missouri Department of Conservation noted that low dissolved oxygen levels killed over 100 fish,” said an agency spokesman for the EPA. However, the congressional letter claims that these fish kills have not been verified by DNR.

Additionally, some in the Lake community have taken issue with the metrics used by the EPA: the Lake of the Ozarks exceeded the impairment threshold by a mere 1.31 micrograms-per-liter of chlorophyll, in 2017. Tests in 2016 and 2018 were well-below the threshold.

“The Department requests that EPA reconsider its listing recommendation on some of the lakes where listing would be premature. The consequences of listing are serious, and therefore impairment determinations require a level of confidence we have not yet reached for these lakes,” the DNR letter said.

The comment period for the EPA’s decision closed on March 22 after being extended from Feb. 5. The EPA has not yet put out a statement on whether or not the Lake of the Ozarks will be declared an impaired waterway and has not declared a timeline for when the agency will make a final decision.

Read the DNR and congressional letter below: 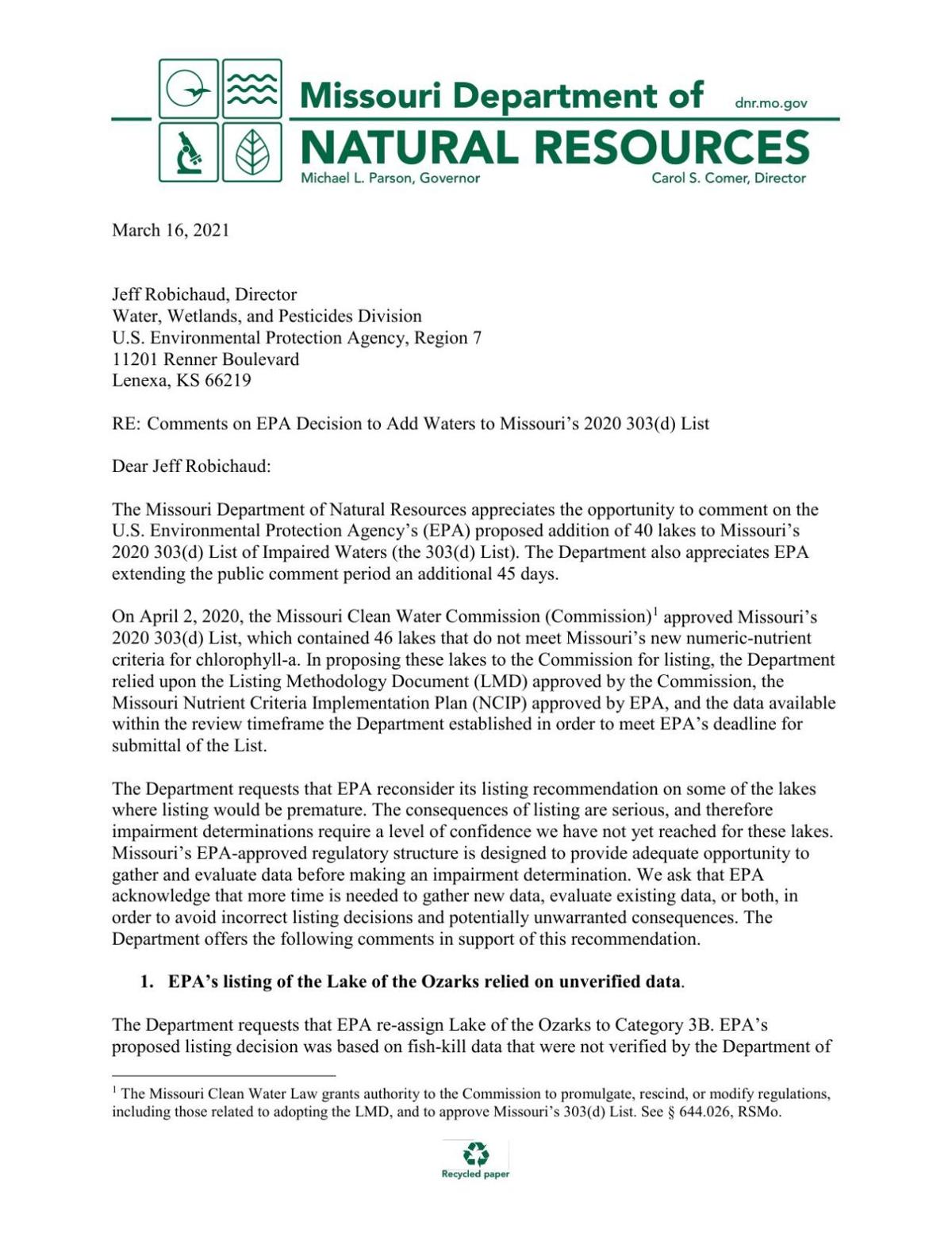 EPA Could Declare Lake Of The Ozarks An 'Impaired Waterway'... Here's Why

Lake of the Ozarks holds an estimated 83 trillion cubic feet of water, boasts 1,150 miles of…