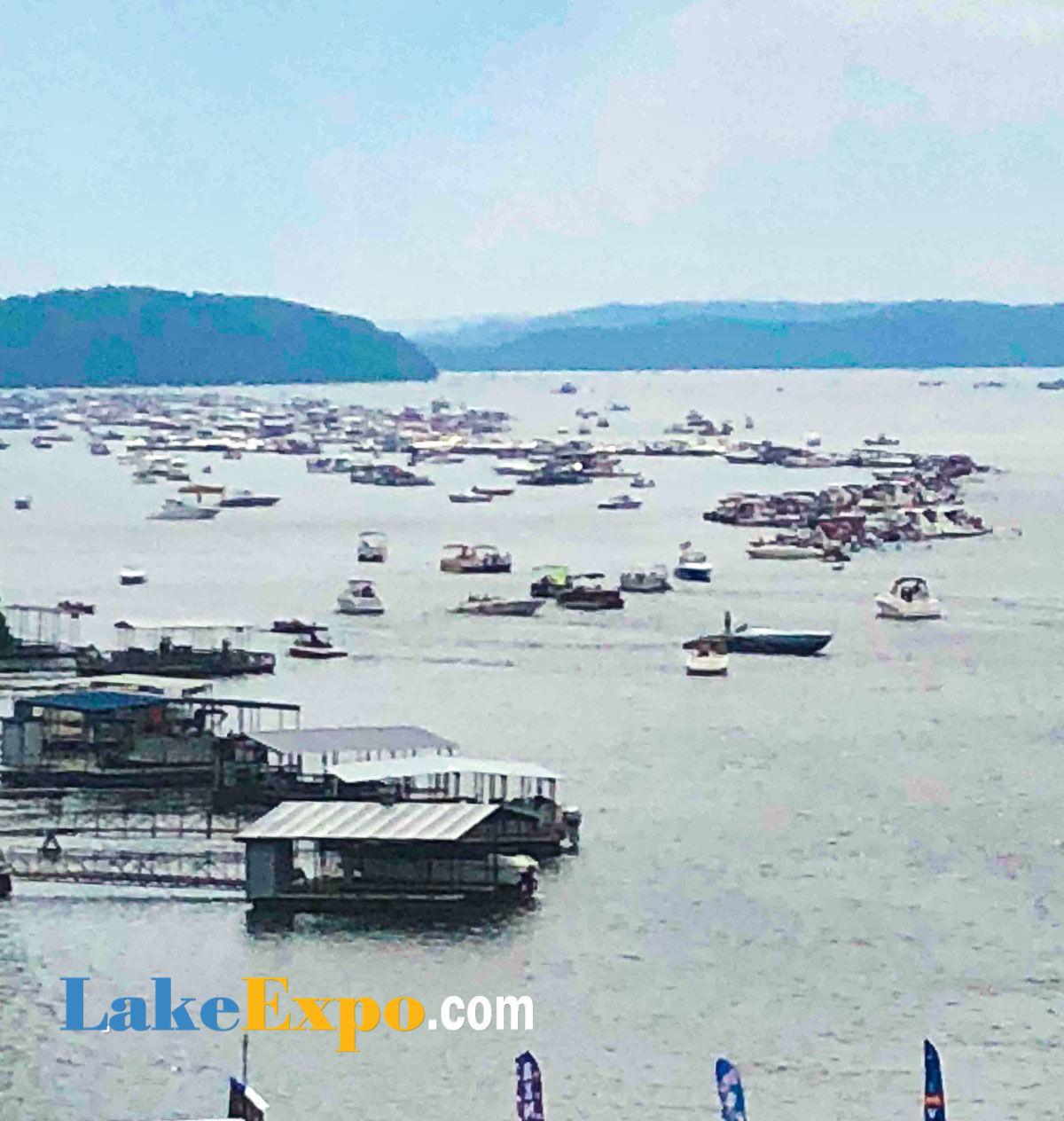 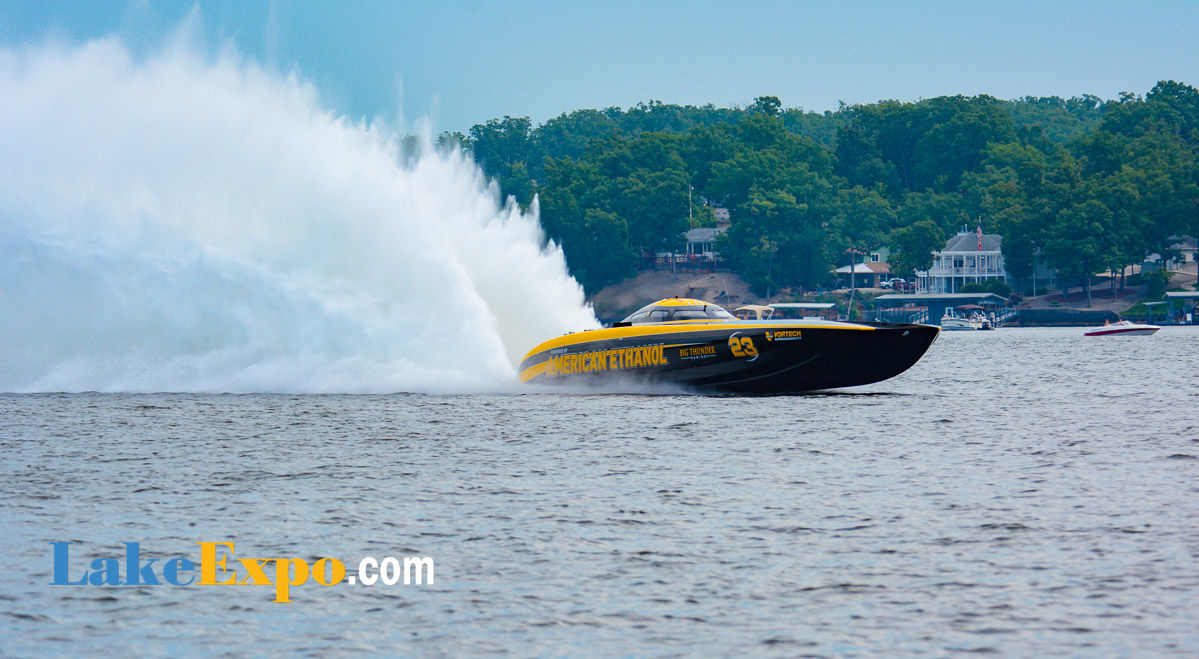 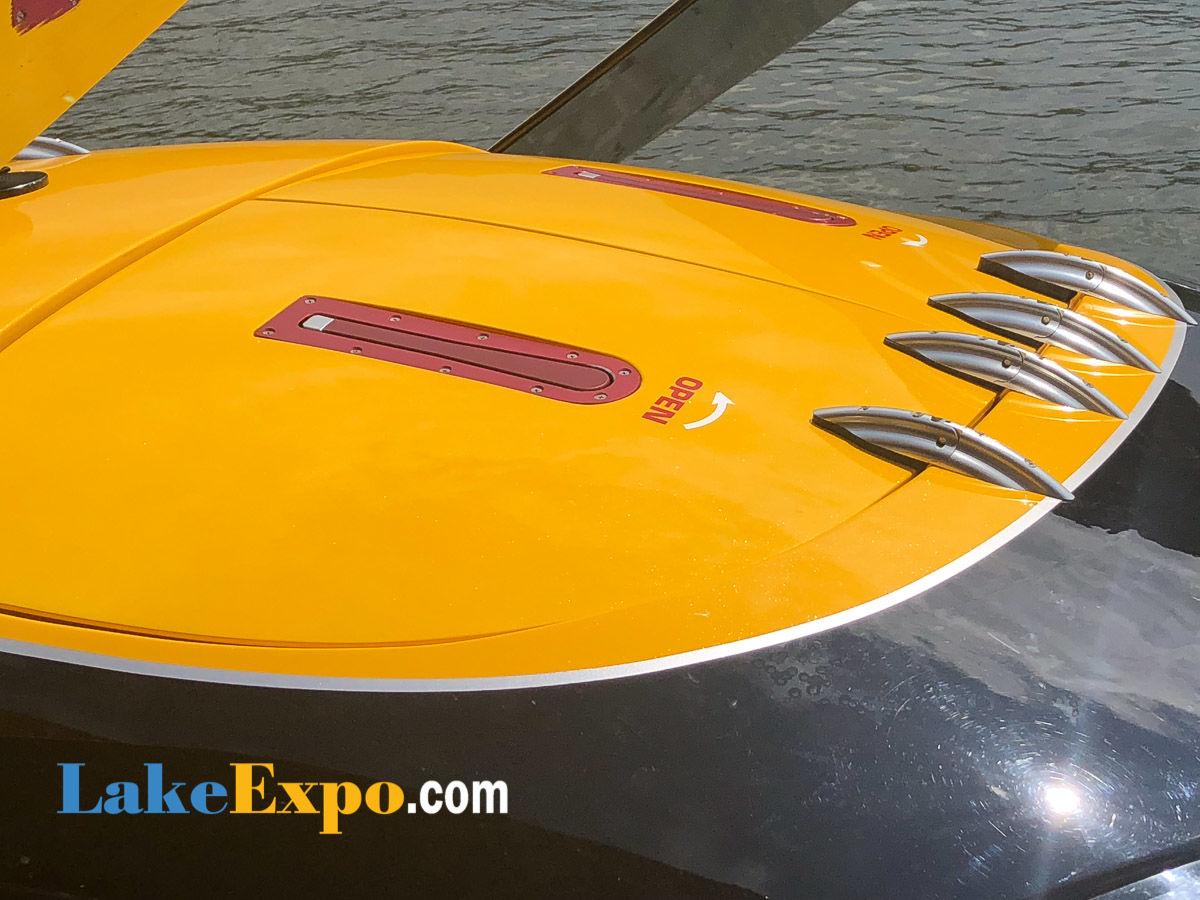 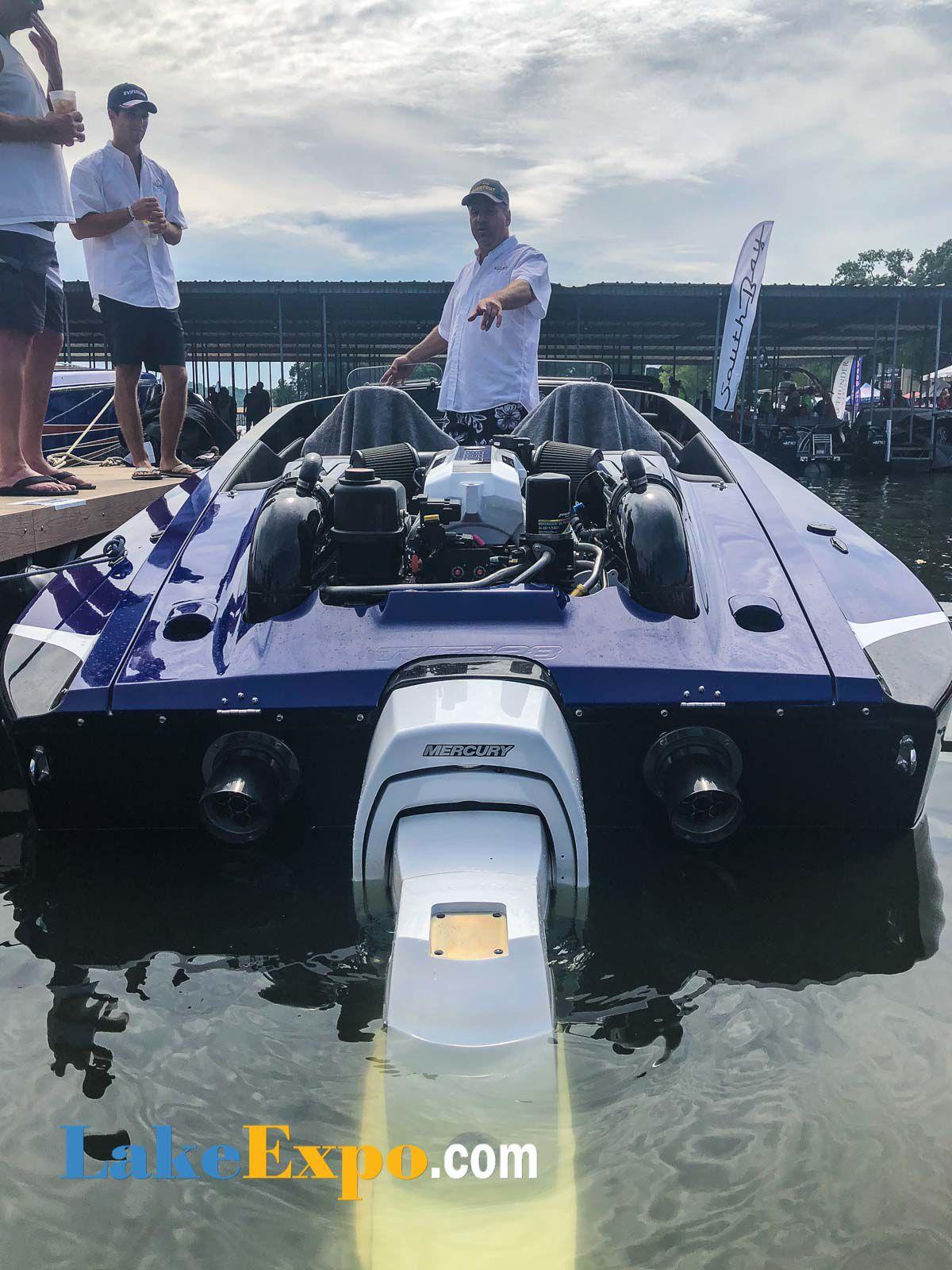 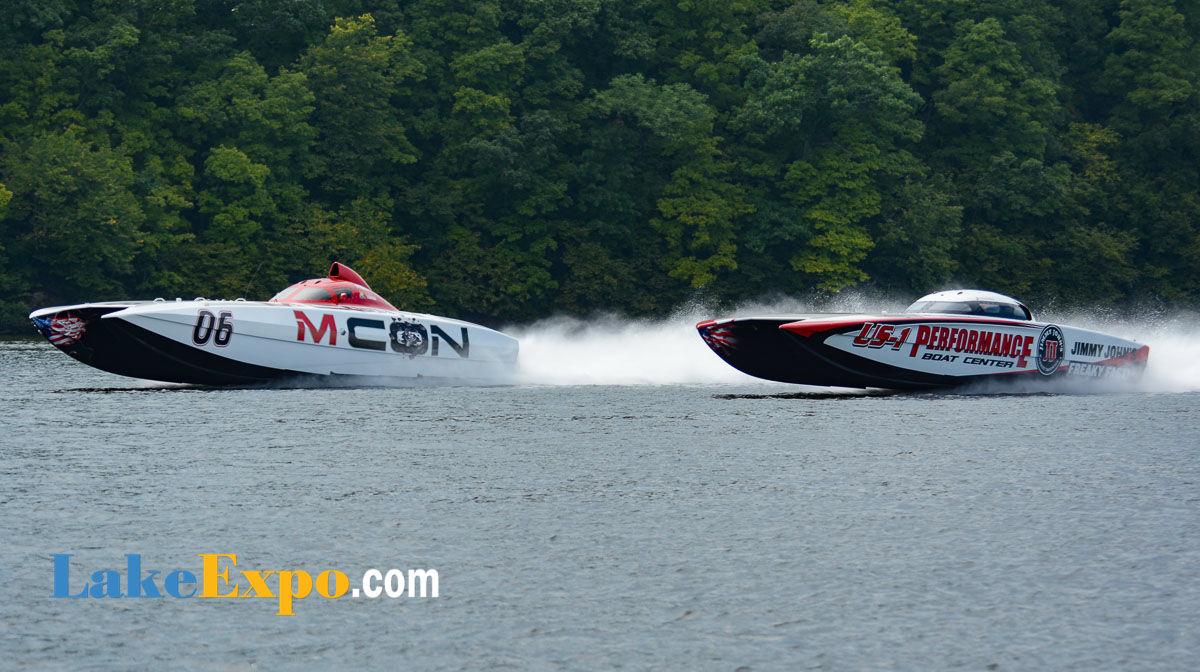 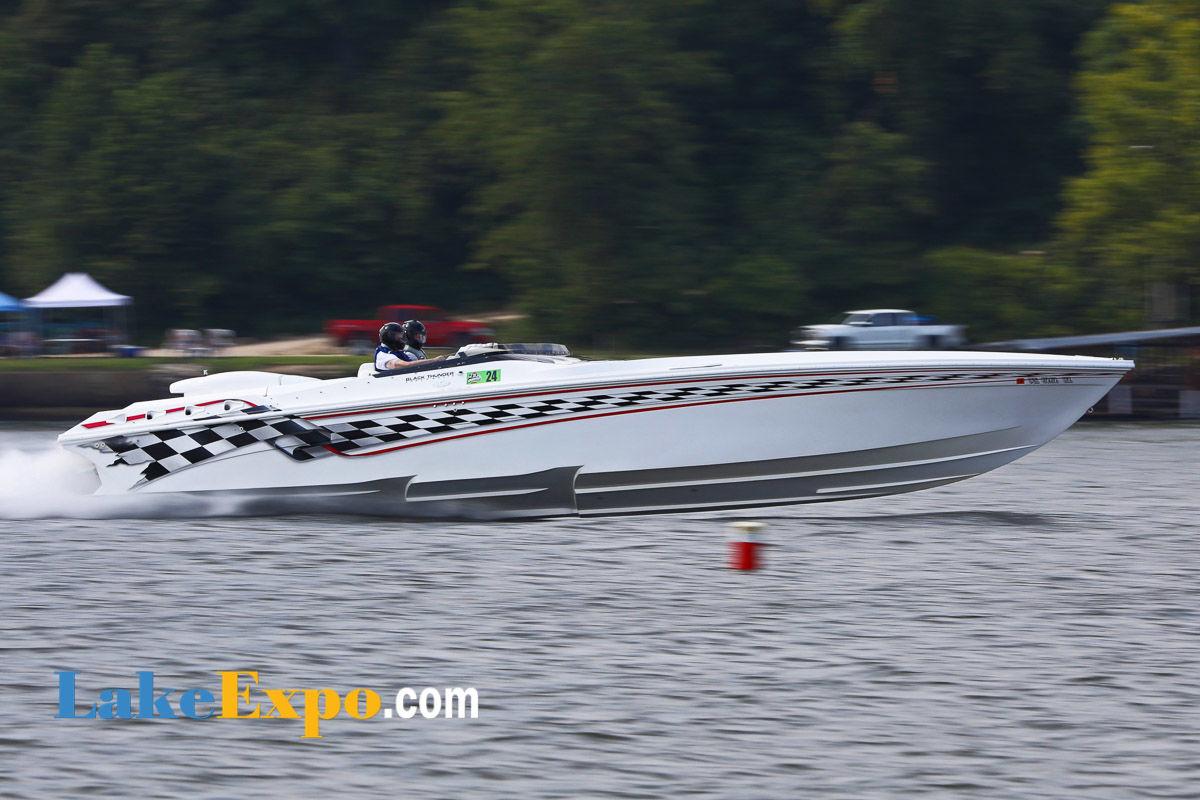 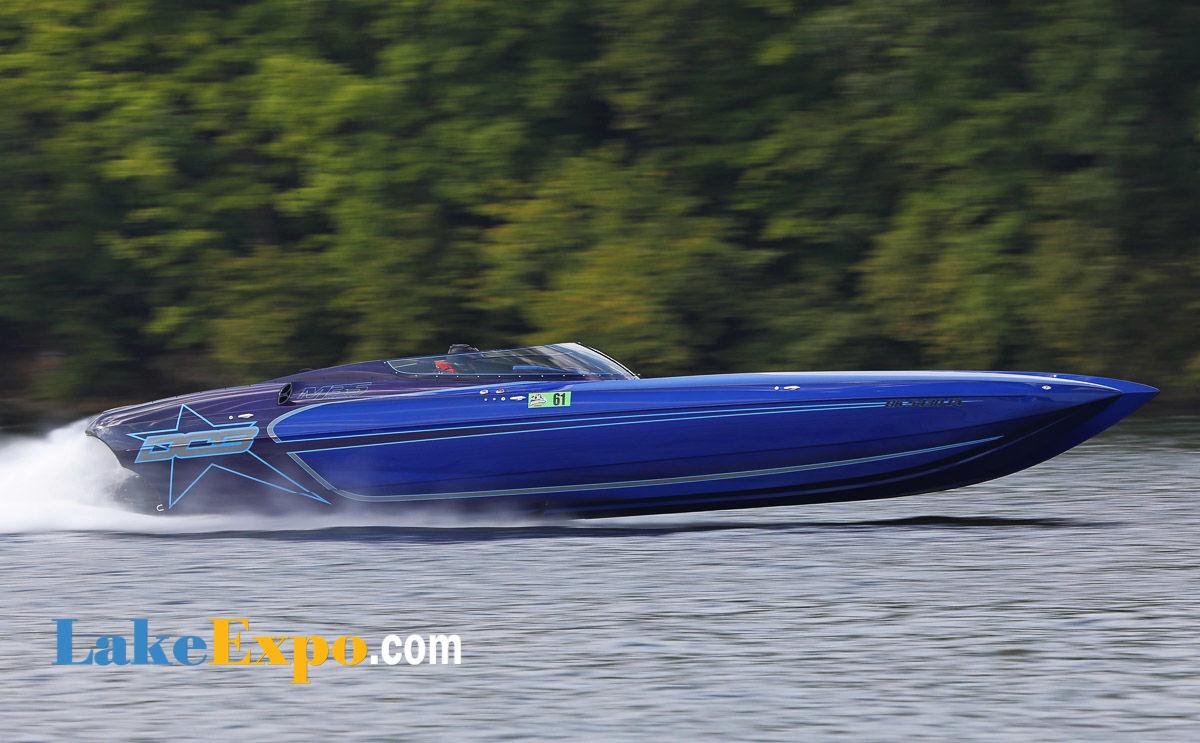 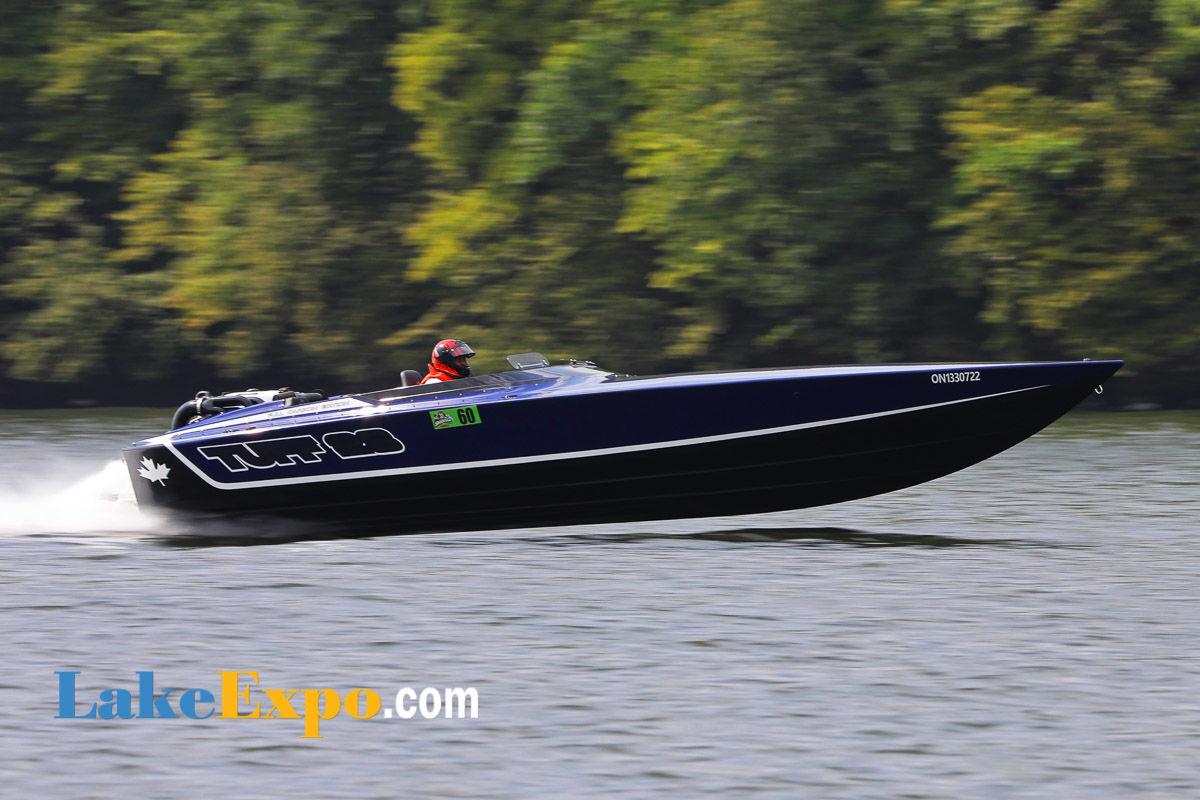 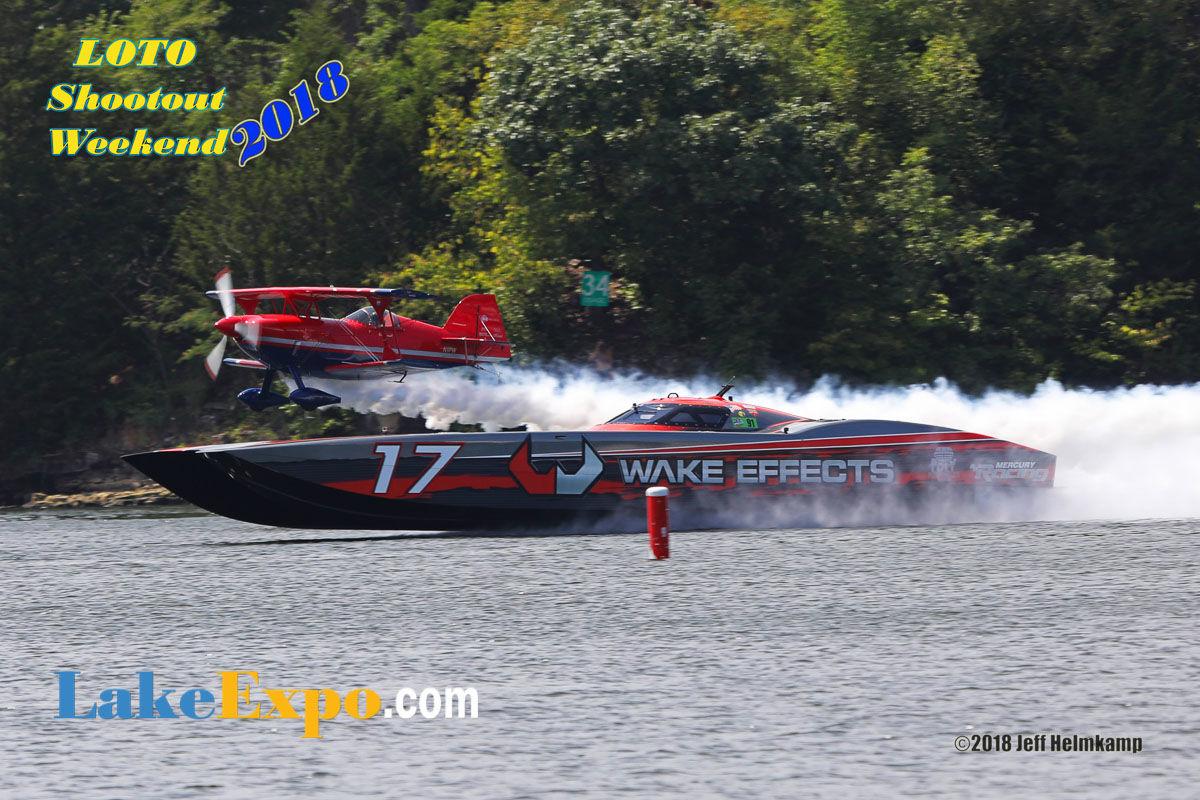 The Lake of the Ozarks Shootout delivered as promised: thousands upon thousands of boaters and race fans turned out to form a two-tiered flotilla, stretching well over a mile along the race course on Saturday, Aug. 25, 2018. On land, Captain Ron’s Bar & Grill was swarming with fans, enjoying the warm day, mingling with racers on the docks, and grabbing a drink or bite to eat around the lakefront complex.

Racers proved the Shootout is a national and international event, with fast boats coming from as far off as Ontario, New York, and Florida, and as close as Osage Beach.

The weather on Saturday morning was tricky, with a sustained wind of about 12 mph making the course a bit choppy and greeting racers with an unsteadying crosswind. The winds were occasionally gusting up to an estimated 20 mph, and those breezes definitely affected course speeds. Jason Parvey, son of newly inducted member of the Shootout Hall of Fame Dennis Parvey, who races with his father in their popular Black Thunder v-bottom, confirmed the crosswind blew them around and hurt their speed on their only run of the day.

But despite the less-than-optimal morning conditions, the Parveys hit 153 mph, as the third boat to run in a one-by-one race that will likely put more than 100 racers on the course over two days.

In Black Thunder’s case, their freeboard—the amount of hull above the water—is fairly high, compared to many catamarans, so that crosswind hit a larger surface area and likely affected them more. However, catamarans can struggle with wind too. The boats work by packing air under the hull, between the sponsons, and drivers have to be careful not to let the bow lift too high.

The comparatively slower run was caused by a “spun out” propeller at the start of the race, and then an unlatched overhead hatched caused a momentary slowdown mid-course.

One of the most impressive runs of the day came from Mark Weigle in his TUFF 28 single-engine v-bottom that incredibly reached into the 120s. Weigl made a gutsy run down the course, smooth as silk and an incredible posture in the water: only the very back of the hull skimmed the surface, with the rest of the v-bottom knifing through the warm summer air.

Weigl later explained this boat is built to “platform” on the water, and as a result, it does not have (or need) the “stepped” hull that is typical of most v-bottoms. If the run isn’t smooth, Weigl said, that means you don’t have the boat set up right.

An intermission just before 2 p.m. pitted propellers in the air against propellers in the water, as an airplane driven by Brian Corell raced Rusty Rahm in the popular Wake Effects racing boat. Wake Effects—appropriately—won by a boat-length. The race came on the heels of a jaw-dropping air show in which Corell pulled dizzying stunts, careening toward the water and pulling up just short of the surface, flying by the cheering crowd, leaving a white smoke tail before shooting straight up and tumbling back down again with flips and barrel rolls.

LAKE OF THE OZARKS, Mo. — In the final hour of Saturday racing, after working on the boat most of the day, the American Ethanol powerboat team…